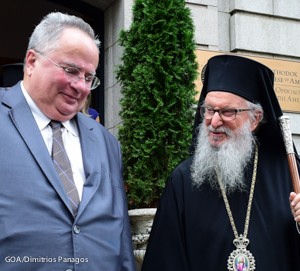 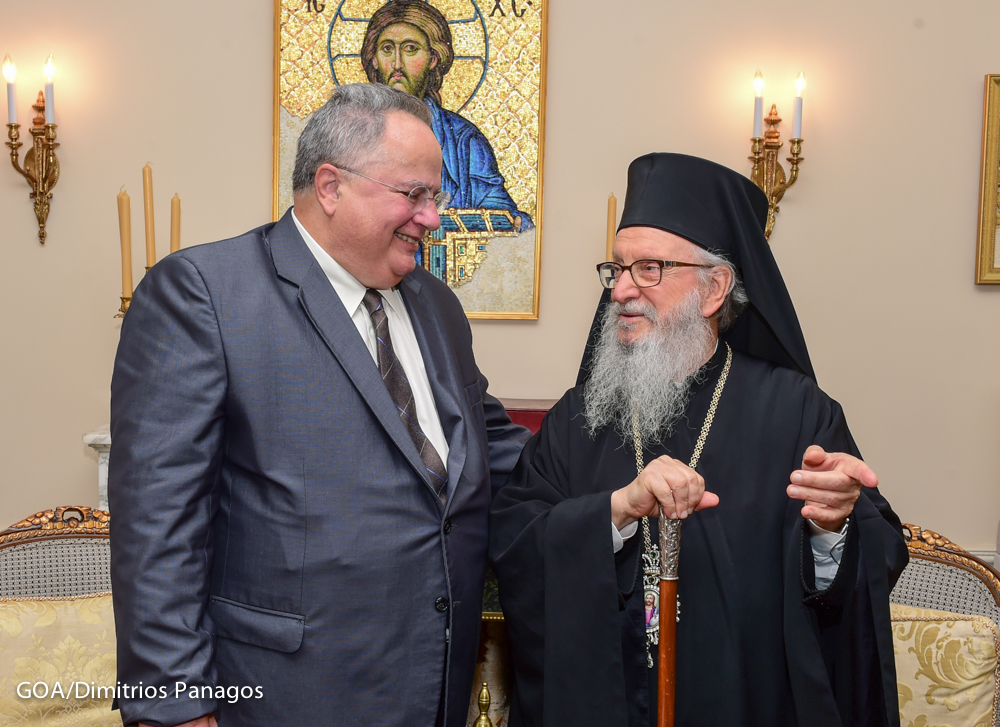 NEW YORK – The Minister of Foreign Affairs of Greece Nikos Kotzias visited today September 21, 2017 His Eminence Archbishop Demetrios of America at the headquarters of the Greek Orthodox Archdiocese of America. Mr. Kotzias has been in New York this past week attending the General Assembly of the United Nations.

The meeting conducted in a very cordial atmosphere, focused on issues of common interest in relation to Greece, the Orthodox Church and the Greek American community in the United States.

Following the meeting Foreign Minister Kotzias speaking to the Press said: “I had the honor and pleasure of a long discussion with His Eminence. We talked about the state of Hellenism in the United States, about issues of civic participation and about education. We have also talked about the Greek-American Schools and the need to increase our presence in large American universities. Of course, I have expressed my respect to a person of great spirituality and intellect, His Eminence, the Archbishop.”

In his reply statement, Archbishop Demetrios used the phase of Saint Paul “speaking the truth in love” (Eph.4:15) to describe the meeting with Mr. Kotzias, adding: “We speak the truth with love and we also love with truth, the phase in Greek is inclusive of all this; we are true and truthful, we speak the truth and we love the truth.”

“I knew Minister Kotzias from other occasions but today I was impressed by his special interest in paideia and education and his intense relation with books. We presented him with our books (he refers to the new series of Greek Language books published by the Archdiocese) and the Minister examined them intently and that to me was very important. I shall remember this moment because it shows his relation and interest for education,” said the Archbishop.

Praising the interest of the Minister and the Greek State for all educational issues and the Greek-American community, His Eminence concluded: “We also proclaim this urbi et orbi, that Hellenism, if it has lived for six millenia, has lived because it serves humanity – not itself. We are to serve mankind and the Minister has stressed this today and I thank him for everything he does about the Omogeneia.