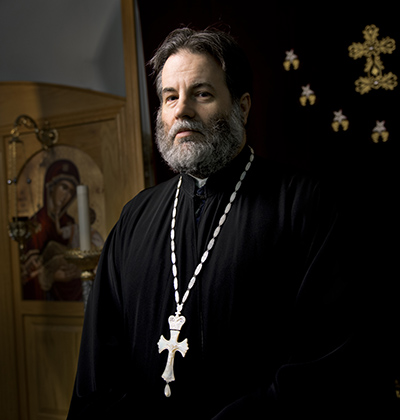 “I am humbled and honored to serve our Holy Archdiocese as the Director of Holy Cross Orthodox Press,” said Rev. Fr. Monos. “It is my prayer that God will bless our collective efforts to make the Press the premier Orthodox Christian publisher in the United States.”

Rev. Fr. Michael has served as Proistamenos of St. Luke the Evangelist Greek Orthodox Church in Columbia, MO, since 2009. He is also the founder of a small Orthodox Christian publishing house, Newrome Press. Rev. Fr. Michael has designed and managed the websites of the Metropolis of Chicago since 2009. He serves on the Archdiocesan Presbyters Council as a representative of the Metropolis of Chicago.

“God has richly blessed the Greek Orthodox Church in America with vast resources – as the stewards of those resources, it is our duty to continually work to translate those manifold blessings into good fruit for both the faithful and those seeking the True Church of Christ,” said Rev. Fr. Monos. “My efforts, as Director of Holy Cross Press, will be to build on the inheritance of the past with an eye towards the future: producing publications of high quality design and utility for all categories of study, for all people, in both old and new media.”

Rev. Fr. Monos is married to Presvytera Jeannie and has one son, Matthew.

The earliest publications of the Holy Cross Orthodox Press date back to the founding of Holy Cross Greek Orthodox School of Theology in 1937. Since that time, the Press has grown into a significant publisher of over 500 books, chiefly in the disciplines of Orthodox spirituality, theology, patristics, liturgics, history, and culture. It has published books from well-known Orthodox authors, as well as notable authors from other traditions. In recent years, Holy Cross Orthodox Press has also published numerous liturgical texts and a series of patristic texts newly translated into contemporary English.