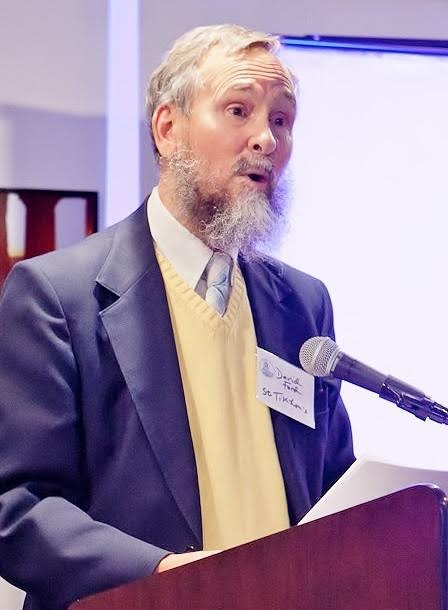 Dr. David C. Ford, Professor of Church History at Saint Tikhon’s Orthodox Theological Seminary [STOTS] here, delivered an address titled “Saint Photios the Great, the Photian Council and Relations with the Roman Church” at the annual meeting of Orthodox Theological Society in America [OTSA] at Holy Cross Greek Orthodox School of Theology, Brookline, MA September 29-30, 2016.  Also attending the conference—the theme of which was “Conciliarity and the Council of Crete”—was his wife, Dr. Mary Ford, the seminary’s Associate Professor of New Testament and Spirituality.

“It was a very good experience to be at the meeting, where several interesting first-hand reports were given about the recent Council in Crete,” said Dr. Ford.  “The keynote address was given by Dr. Elizabeth Prodromou, a trained political scientist, on some of the geo-political realities that inevitably influenced that Council and the various back-stories behind it.”

In his address, Dr. Ford recounted the enthralling story of the high-level controversy between Saint Photios the Great and Pope Nicholas I of Rome in the 860s, when Nicholas attempted to declare who was the legitimate patriarch of Constantinople — Photios, or his predecessor Ignatius, who had resigned.  In addition to solving this controversy, the Photian Council of 879-880, which was accepted by the Papacy for the next 200 years, outlawed any changes to the Nicene Creed, thus forbidding the Filioque clause added to the Creed in the West.  The Council also repudiated Roman claims to jurisdiction over the Eastern Churches.

“A number of Orthodox theologians have emphasized the ecumenical authority of the Photian Council of 879-880,” Dr. David observed.  “In fact, I began my talk with a quote written in 1996 by Alexander Golitzin, now His Grace, Bishop Alexander of Dallas, the South and the Bulgarian Diocese of the OCA, [in which he stated that] ‘given the convocation of another ecumenical council, the Orthodox Church would almost certainly recognize the synod of 879 as the Eighth Ecumenical Council.’”

“This would make it even more clear to everyone that the Orthodox Church will never recognize any change to the Nicene Creed, and will never allow Papal authority over Her, and that She holds the crucial distinction between God’s Essence and His Energies, which was articulated and proclaimed in the Palamite Councils, at the level of unchanging, dogmatic, eternal Truth,” Dr. Ford concluded.