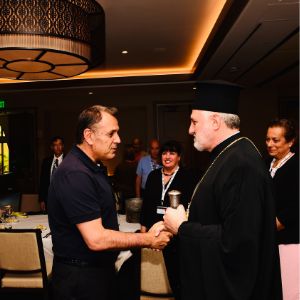 At the AHEPA Supreme Convention on Thursday, July 21, the current and past Supreme Presidents and officers of AHEPA hosted a lunch in honor of His Eminence Archbishop Elpidophoros and His Excellency Nikolaos Panagiotopoulos, Minister of National Defense of the Hellenic Republic, who would both offer remarks at the Convention’s Grand Banquet later that evening.