Home/Ministries/Considering St. Mary of Egypt’s Life of Repentance
Previous Next 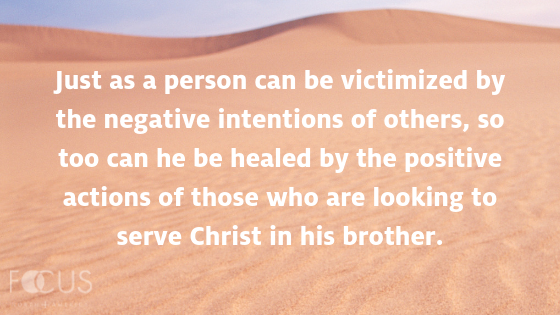 Very little is known about the early life of St. Mary of Egypt, except that she was stripped of her innocence at the tender age of twelve. Over the next seventeen years, after having run away from her childhood home, she lived in a type of spiritual slavery to her physical passions, which led her to victimize many “young men,” likely in a similar fashion to how she was victimized when she was young.

Often times, persons who have been emotionally defrauded or physically abused early in life, will respond with similar destructive behavior toward others as a way of taking back the aspect of control that they were not afforded in their own lives.

The life that St. Mary lived during those years was one of separation from God and His assembly, and despite having indulged in such unhealthy pursuits, she still pined for a different kind of life; one that was void of such destructive proclivities.

St. Mary’s journey toward reconciliation is one that should be relatable to most, since her transformation did not take place in an instant. Rather, the process whereby she would become whole, would take many years and countless prayerful acts of repentance.

Today, psychologists and counselors might estimate that St. Mary suffered from a sexual addiction as a result of the trauma she endured as a child. Like many addictions, a person’s response to that which is perceived to control his behavior can often manifest negative habits. The results of these habits can be far-reaching and leave a trail of ruination. Often, through no fault of his own, a person may find himself living as a victim of someone else’s violent behavior, which can hinder his ability to pull himself up out of a desperate pit that has been created for him. But, just as a person can be victimized by the negative intentions of others, so too can he be healed by the positive actions of those who are looking to serve Christ in his brother.

At FOCUS North America, we look to ameliorate the plight of the poor because we realize that people are often suffering as a result of the choices that were thrust upon them without their consent. In an attempt to reverse the negative effects that have been forayed upon a person’s life, servant-leaders at FOCUS look to see Christ in, and be Christ for each person we serve. It is precisely because we understand the responsibility we have for our brothers and sisters that we act and respond with love toward people who may have been stripped of a fair shot at living a healthy and positive life—one that is oriented toward God.

Whether it is providing backpacks, stuffed with school supplies, to be distributed to home-insecure children and youth, so that they do not fall behind in school and in life, or providing families with toiletries and food, in order to help them avoid going into, or transition out of a shelter, FOCUS wants to be sure that we are doing everything we can to be a positive impact on the people we serve in communities across North America. Like St. Mary’s own journey, we understand that, for many, the process of becoming whole is often a slow and arduous one, but offering help along the way will ease the road of repentance for those who require it most.

During this Fifth Sunday of Great Lent, let us remember to see Christ and be Christ on our journey to Pascha.

This Lenten Season, join our journey through “40 days with FOCUS,” a special weekly blog series where you will hear Lenten reflections from different servant-leaders who work within our organization. We are excited to share wisdom from the men and women who lead our ministries across the country with love and live out the mission of FOCUS every day in their work and lives. Thank you for reading! Make FOCUS part of your Lenten Almsgiving Today