Our Seminary’s 2017 Commencement ceremonies, held May 20, included several distinguishing moments in addition to the granting of degrees to 16 graduates in three academic programs. Among the exceptional highlights were remarks to graduates by His Beatitude the Most Blessed Tikhon, primate of the Orthodox Church in America (OCA) and chair of the Seminary’s Board of Trustees; the commencement address by His Grace the Right Reverend John (Abdalah) of the Diocese of Worcester and New England, of the Antiochian Orthodox Christian Archdiocese of North America (AOCANA); and the recognition and commendation by the Seminary’s Board of Trustees of Archpriest John Behr for his 10 years of service to the school as Dean, as well as the announcement of Fr. John’s appointment to the newly established “Father Georges Florovsky Distinguished Professorship of Patristics.” (View a video of the entire Commencement on our Facebook page, here.) 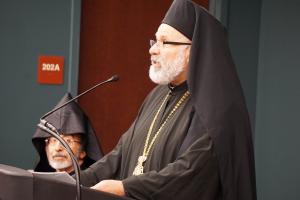 Alumnus Bishop John (Abdalah) delivers the Commencement Address (photo: Adrienne Soper)A Molieben (Service of Thanksgiving) in Three Hierarchs Chapel, with Metropolitan Tikhon presiding, and a formal procession of hierarchs, faculty, and students from the chapel to the Metropolitan Philip Auditorium immediately preceded the Commencement, which was formally opened by His Beatitude. Seminary President Archpriest Chad Hatfield then offered a summary of highlights from Academic Year 2016–2017 to the large audience and introduced the Commencement Speaker, Bishop John, who is an alumnus of St. Vladimir’s.

In an address titled, “What I wish I had known 39 years ago,” Bishop John offered practical advice from his own experience as a lay leader, seminarian, parish priest, and hierarch. “As difficult as my mission was to be, ministering to people of many generations, from varied ethnic and socio-economic strata, from hippies to Babas,” His Grace quipped to the graduating class, “your challenge is greater. In addition to dinosaurs of my generation, you will live among post-modernists who imagine themselves to be the center of the universe, and who believe themselves to be self-contained, needing no ‘other’ for fulfillment. You will minister to people for whom truth is, at best, relative. For many, including baptized Orthodox Christians in our pews, people believe themselves to be self-sufficient, needing no other; and amazingly enough, ‘no other’ includes God.

“I must confess that I came to seminary,” His Grace recalled, “confident that I knew quite a bit about my faith and parish life. After all, I had served in the altar from a very young age, had been an officer of our teen group, and had served as a member of the choir and parish council. Every semester I realized that I knew less and less, and today, I am the least confident in my grasp of theology. I am committed, however, to an understanding that this is indeed the process of education, particularly when encountering the ultimately unknowable. In any case, we serve as best we can, striving to be faithful to God and to the complex people we serve. 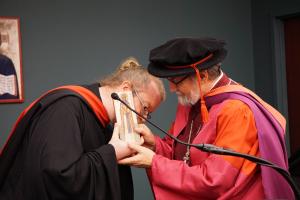 Dn. Joseph Wesseler presents the St. Macrina Award to Fr. Chad Hatfield (photo: Adrienne Soper)“Are you ready to commence your lives as churchmen and women?,” Bishop John asked. “Let me share what I wish I knew when I started my church life some forty years ago.” (Read His Grace’s full address here.) 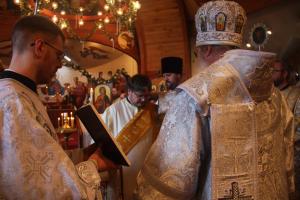 Metropolitan Tikhon elevates Dn. Gregory Hatrak to the rank of Protodeacon (photo: Alexandru Popovici)Between the Salutatory and Valedictory addresses, Dn. Joseph Wesseler, president of the Student Council, presented the “St. Macrina Award,” an annual honor bestowed by the student body upon the faculty member deemed most valuable to their formation and study. The award this year went to Fr. Chad Hatfield, whose courses at the Seminary have focused on Pastoral Theology and Missiology. (View a video of the Salutatory and Valedictory Addresses and bestowal of the St. Macrina Award here on our Facebook page, and read the text by Dn. Joseph presenting the award here.)

The presence of Metropolitan Tikhon bookended the day’s ceremonies, beginning with his presiding at the Divine Liturgy, during which he elevated Deacon Gregory Hatrak, director of Marketing and Operations at SVS Press & Bookstore at the Seminary, to the rank of Protodeacon. His Beatitude lauded the newly elevated Protodeacon, saying, “It is particularly fitting that this takes place today, on the day of commencement for the Class of 2017, as your service as a deacon is an example of what humble and obedient service to our Lord Jesus Christ looks like, which is the sole purpose for the existence of this seminary.” (Read Metropolitan Tikhon’s full remarks to Pdn. Gregory here, and his homily at the Divine Liturgy here.) 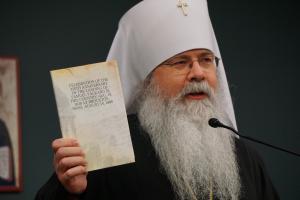 Metropolitan Tikhon addresses the graduating class (photo: Adrienne Soper)In his closing remarks, His Beatitude first offered wisdom to the graduating class, using pragmatic words taken from a document dated 1888, handed down to his family from his own maternal ancestors. He urged graduates to appropriate and apply the historic advice to their own vocations and situations, putting their newly acquired learning “to work, not for personal gain, but in the fulfilling of the Apostolic Work by which we make ourselves worthy of the name ‘Christian.’” (Read Metropolitan Tikhon’s closing remarks to the graduates here.)

His Beatitude then thanked Fr. John Behr on behalf of the Board for his “spiritual and academic leadership,” and further noted the Seminary’s extensive growth under Fr. John’s deanship, including reaccreditation with the Association of Theological Schools (ATS), re-establishment of the Doctor of Ministry Program, and implementation of a new Master of Divinity curriculum. Metropolitan Tikhon also recognized Fr. John’s “lasting contribution” to the life of St. Vladimir’s Seminary as “the uniting of the pastoral and the academic into a prophetically bold formation of clergy and lay leaders prepared to ‘speak the truth in love’ (Eph 4:15).” 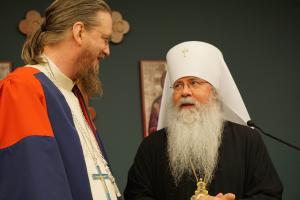 Metropolitan Tikhon, announcing the appointment of Fr. John Behr to the “Father Georges Florovsky Distinguished Professorship of Patristics” (photo: Adrienne Soper)After honoring Fr. John, His Beatitude presented him with a pectoral cross once worn by Protopresbyter Thomas Hopko, former dean of St. Vladimir’s, which had, in turn, been handed down to Fr. Thomas from Protopresbyter Alexander Schmemann, who had originally received it from Archimandrite Cyprian Kern. (Read His Beatitude’s full remarks regarding the professorship here.)

His Beatitude further announced that the Board of Trustees has formed a Search Committee to fill the position of Dean at St. Vladimir’s, and that details would be forthcoming.

View a performance by the St. Vladimir’s Women’s Chorale during Commencement ceremonies, here on our Facebook page.