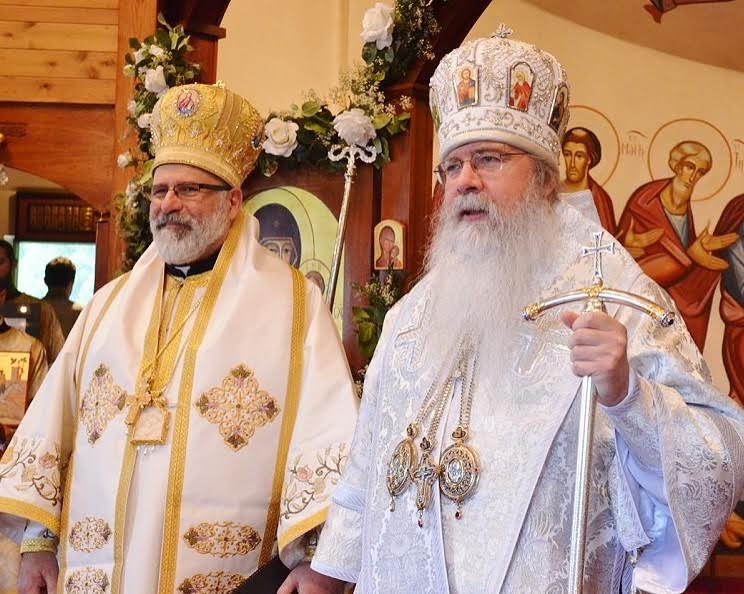 His Beatitude, Metropolitan Tikhon presided over the Spring Meeting of the Board of Trustees and annual Commencement Exercises at Saint Vladimir’s Orthodox Theological Seminary [SVOTS] here Friday and Saturday, May 19 and 20, 2017.

As Chairman of the SVOTS Board, Metropolitan Tikhon convened a meeting of the seminary Trustees on Friday, during which reports on the academic and institutional life of the seminary were offered.  The Board of Trustees consists of 24 men and women representing nearly all Orthodox jurisdictions in North America.  Among them are His Eminence, Metropolitan Joseph of the Antiochian Orthodox Christian Archdiocese of North America; His Eminence, Metropolitan Zachariah Mar Nicholovos of the Malankara Orthodox Church; and His Grace, Bishop David of the Coptic Orthodox Church’s Diocese of New York and New England.  Of note at the meeting was the launch of the search for a new seminary Dean and the appointment of the former Dean, Archpriest John Behr, to the Father Georges Florovsky Professorship in Patristics.

On Saturday, Metropolitan Tikhon presided at the Commencement Divine Liturgy, at which His Grace, Bishop John of the Antiochian Diocese of Worcester and New England concelebrated.  During the Divine Liturgy, Metropolitan Tikhon elevated Deacon Gregory Hatrak, Director of Marketing and Operations at SVS Press, to the dignity of Protodeacon.  Metropolitan Tikhon also honored members of the seminary’s chapel community, Joseph and Teressa Dominick and Vera Hubiak, with Primatial and SVOTS gramotas for their years of service to the seminary community.  Mr. Dominick also received an icon of his patronal saint, Joseph the Betrothed, on behalf of the seminary community.

In his remarks to the graduates of the class of 2017, Metropolitan Tikhon shared words of greetings offered in 1888, at the 250th anniversary celebration of his family’s arrival in North America:  “…From this day we are to go forward into a new life, with new purposes, new ambitions, new hopes.  And we are to do this, not by resolutions and speeches, not by thinking it over, but by taking hold of the things that come to our hands and utilizing them.  Let us accept the wealth that may be ours, and increase it by honest effort, and make it serve the world.  Let us take a becoming pride in the family name, and stand by each other in zealously guarding it from bad repute.  Let us even perpetuate the name by carefully prepared records which shall be accessible and reliable.  In this respect we are altogether behind many families whose history is no more worthy of record than our own.”

Metropolitan Tikhon went on to explain that “these are pragmatic words from the United States in the post-Reconstruction Era that may seem outdated to our ears, but I believe that they can easily be translated to apply to you, the 2017 graduates of St Vladimir’s Seminary.

“Each of you is a member of the family that goes by the name of ‘Christian,’” Metropolitan Tikhon continued.  “And each of you has received a great gift here at the seminary, a gift of learning and wisdom.  It is now your turn to take hold of what has been given to you and put it to work, not for personal gain, but in the fulfilling of the Apostolic Work by which we make ourselves worthy of the name ‘Christian.’”  It is a lofty goal that guides you as you move beyond the seminary into whatever path the Lord and His Church call you and your families.  Remember that there is really only one thing to strive for—eternal salvation in the Heavenly Kingdom.  And there is only one way to find that salvation, and that is by taking hold of the things that come to your hands and utilizing them for the life of the world.”

A gallery of photos soon will be available on the OCA web site and Facebook page.  Additional information and a photo gallery may be accessed on the SVOTS web site.