Home/Seminaries/HCHC Honors 2017 Alumni of the Year
Previous Next

The HCHC Alumni Association honored three of its own as Alumni of the Year at a celebratory dinner on May 18 under a tent atop the Holy Hill. Over the years since they graduated, these remarkable individuals have, in different ways, faithfully served the Greek Orthodox Church in America and their alma mater, rightly earning the respect and love of all who know them.

HCHC President, Rev. Fr. Christopher Metropulos told the large audience of alumni and friends, which included the 25th reunion class of 1992 and the tenth of 2007, that “HCHC alumni are the lifeblood of our Church throughout the country and around the world…This is your school and your home.” HCHC Alumni Association President, Rev. Fr. Demetrios Costarakis, echoed those sentiments and introduced the first honoree, His Eminence Metropolitan Gerasimos of San Francisco, who, he said, “was a father figure for many of us when we were here.” 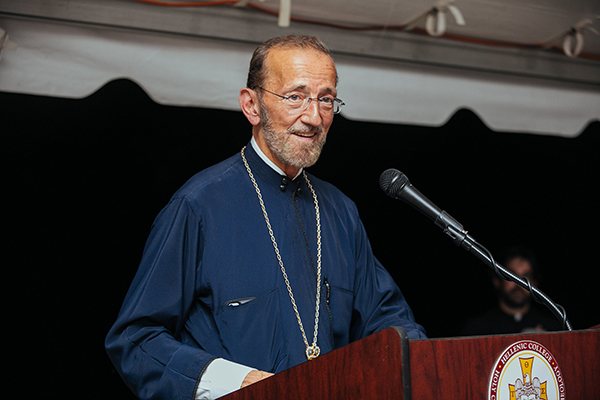 His Eminence graduated from both Hellenic College (1973) and Holy Cross (1976) with high honors, then went on to fill many roles at HCHC, including Dean of Students and Director of Admissions. During his tenure as Dean of Students, he was instrumental in the success of numerous programs benefiting future priests and their families and supporting the emotional and spiritual growth of all students.

“I was given the great privilege of serving the school in a variety of capacities,” His Eminence said. “I have done what all alumni should do—support the school, so that it can thrive and grow.” He added that “there is a great deal of love on this Holy Hill.”

Honored with His Eminence as Alumni of the Year were Rev. Fr. Vassilios Bebis and Presv. Chrysoula Kourkounti. Fr. Vassilios graduated from Hellenic College in 1992 and from Holy Cross in 1995, the same year Presv. Chrysoula graduated from Hellenic College. Both went on to earn advanced degrees in theology and counseling psychology, respectively. They are celebrating their 25th wedding anniversary this year. 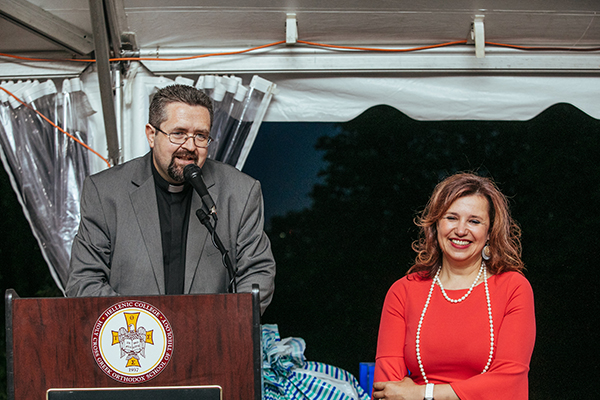 Fr. Vassilios has served as presiding priest at St. Nectarios Church in Roslindale, Massachusetts, for fifteen years and is a member the Metropolis of Boston committee for Philoxenia House. However, his service to the Orthodox Church extends well beyond Boston through his involvement with the Sophia Institute at Columbia University/Union Theological Seminary and the Orthodox Metropolitanate of Hong Kong and Southeast Asia.

Presvytera Chrysoula Kourkounti serves as the Community Engagement and Career Services Coordinator at HCHC. She has many years of experience as a social worker and as a clinical art therapist for abused and developmentally challenged children and adults with a history of trauma.

Recalling their student days, when they were far from their native Greece, Fr. Vassilios said, “We had no family in America, but this is not just a school—it’s a family…We remember the kindness of Archbishop Demetrios, who was always teaching us—not only with his scholarship, but with his example.” He and Presv. Chrysoula also expressed gratitude to Metropolitan Gerasimos, who was Dean of Students then, and to Metropolitan Methodios, who was President, for their support and guidance.

In closing remarks, His Eminence Archbishop Demetrios, Geron of America, observed that “the main characteristic of the Church is continuity, and this school is an example of that—one generation succeeds another. This school combines the continuity, the tradition, the unbroken line.”