The music of Estonian composer and Orthodox Christian Arvo Pärt—considered “spiritually powerful” by a large and widely diverse audience—provided the basis for an exploration of the relationship between sound and the sacred at an international conference in the heart of NYC’s arts scene, May 1–4, 2017. Musicologists, art historians, performance artists, experts in architectural acoustics, and renowned scholars and theologians gathered for the event, titled, “Arvo Pärt: Sounding the Sacred,”at McNally Amphitheater on Fordham University’s Lincoln Center Campus. 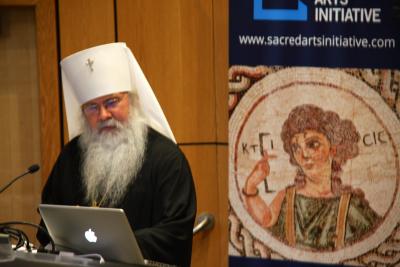 Metropolitan Tikhon opens the “Sounding the Sacred” conference with theological reflection on Pärt’s works (photo: Alexandru Popovici)His Beatitude Metropolitan Tikhon, primate of the Orthodox Church in America (OCA) and Chair of the Board of Trustees at St. Vladimir’s Seminary, opened the conference with a theological reflection titled, “The Sound of Silence: The Appeal of Arvo Pärt to the Human Heart.” Taking note of the music’s near-universal appeal, Metropolitan Tikhon preferred to characterize Pärt’s music as “supremely personal.” In an address that featured references both to popular culture and ancient desert ascetical writers, the Metropolitan said that Pärt’s diverse listeners “feel as though he were a friend, or as if they were within the music itself, as though they were part of this composition.” He suggested, “Perhaps this is because the meaningful silence that dwells in and through the notes introduces us into deep prayer and humility.” (Video recordings of the l pre- and post-conference lectures, by organizers and presenters, will all be made available here.)

Professor Peter C. Bouteneff, director of both the Sacred Arts Initiative and Arvo Pärt Project at St. Vladimir’s Seminary—which hosted the event in collaboration with the Orthodox Christian Studies Center of Fordham University—remarked upon ways in which the conference “broke new ground” in examining Pärt’s music. 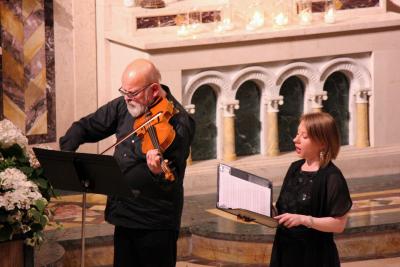 The Goeyvaerts String Trio+ performs Pärt’s music (photo: Mary Honoré)”People have been analyzing Pärt for decades by looking into it, exploring its inner workings,” Bouteneff began. “Our interest here was with the phenomenon of the music itself, how it impresses itself onto its listeners. We were interested in how the music’s sacred content is embodied in sound, which led us all to explore, from different angles, what we mean by ‘sacred,’ and how Pärt’s music manages to give it such a tangible and resonant expression.”

Additionally, Dr. Bouteneff marveled at the uncanny but frequent phenomenon spawned by a performance of Pärt’s music: its ability to unite diverse persons through their common humanity.

”As is always the case when you bring ‘Pärt people’ together, one is struck by the breadth and scope of their interests and their different entry-points into his music,” he observed. “Far from everyone is interested in the ‘spiritual’ as such, or at least in talking a lot about it. But everyone feels strongly about the music and is touched by it to their core. That engagement deeply enriches their reflections on the composer and his oeuvre—as scholars, performers, and deep listeners.” 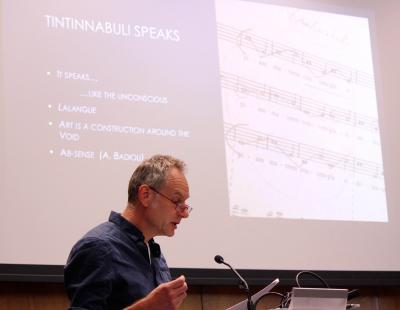 Phillippe Grisar of Sint-Niklaas, Belgium, presenting his paper, “Beyond Silence” (photo: Mary Honoré)As part of the four-day event, a public musical performance of Pärt’s music, with the ”Goeyvaerts String Trio+,” organist and Pärt scholar Andrew Shenton, and percussionist Yousif Sheronick, was also held at Holy Trinity Church, 213 West 82nd Street. (Read a review by Jake Romm, “For Arvo Pärt Music and Silence Are Divine” in the online publication The Forward.) This chamber performance of some of Pärt’s more austere works—some of which are only rarely performed—was carefully attuned to the conference’s focus on the sonic effect of Pärt’s work.

In a personal message to Bouteneff, Arvo and Nora Pärt congratulated the organizers and welcomed the potential of the conference’s papers to chart new directions in the understanding of the composer’s work. Michael Pärt, Chair of the Board of the Arvo Pärt Centre in Estonia, and Karin Kopra, Editor/Archive Specialist at the Centre, were in attendance at all sessions of the Conference, and compiled reports to share with the Centre.

Support for each event was generously provided by the Henry Luce Foundation.
Read the program for the event here.