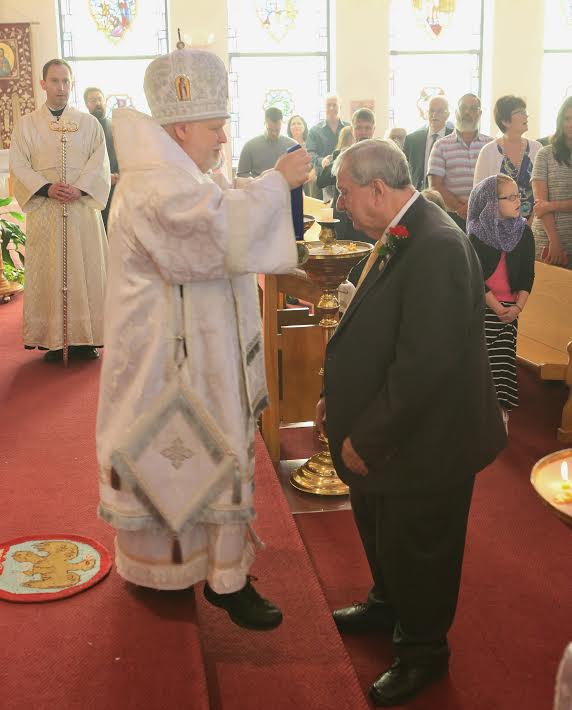 On behalf of His Beatitude, Metropolitan Tikhon and the members of the Holy Synod of Bishops of the Orthodox Church in America, His Grace, Bishop Paul of Chicago and the Midwest presented the Order of Saint Romanos to John Sutko at the conclusion of the Divine Liturgy at Saint Peter and Saint Paul Church, Burr Ridge, IL on Saturday, May 6, 2017.

During their Spring Session March 28-31, 2017, the members of the Holy Synod awarded the Order of Saint Romanos to Mr. Sutko in recognition of his extraordinary contributions to the field of liturgical music in the Orthodox Church in America.  In addition to serving as choir director at Saint Peter and Saint Paul Church for over six decades, Mr. Sutko is well known for his musical arrangements of classic as well as recently composed liturgical hymns.  His entire life has been dedicated to the Church, her services and her musical traditions.  See related article for a detailed biography. 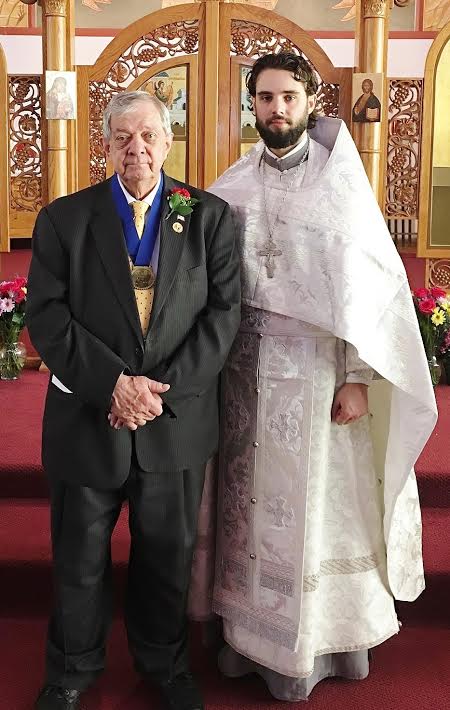 The joy of the day’s Liturgy was amplified by the ordination to the priesthood of Mr. Sutko’s grandson, Priest Alexander Koranda, a “native son” of Saint Peter and Saint Paul parish and graduate of Saint Tikhon’s Seminary, South Canaan, PA.  Among those concelebrating were Archpriests John Adamcio, John Baker and Paul Jannakos; Priests Andrew Bartek, Herman Kincaid, and Gabriel Monforte; Protodeacons Robert Northrup and George Potym; and Deacons David Kenny, Mark Sauskojus, and Theophan Warren.  A deanery-wide choir sang the responses under the direction of Philip Sokolov.

Flight cancellations due to inclement weather on the east coast prevented Metropolitan Tikhon from attending the festivities.