With the blessing of His Grace Irinej, bishop of the Eastern Diocese of the Serbian Orthodox Church and St. Vladimir’s Seminary alumnus (M.Div. ’82), the parish community of St. George Serbian Orthodox Church, North Canton, OH, hosted an alumni gathering and gala banquet in support of the Seminary on Sunday, April 30. The events coincided with the “Slava,” or patron saint’s day, of the parish. 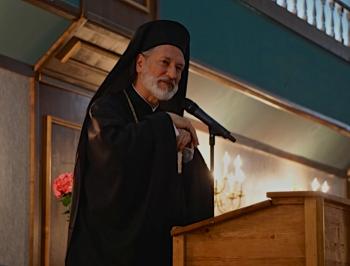 At the gala’s banquet, His Grace presented the main keynote, sharing a story of a blessing he had received from St. Nikolai Velimirovic while still in his mother’s womb, and transitioning to the impact St. Nikolai had on the life and development of St. Vladimir’s Seminary. Father Chad spoke of the Seminary’s historical witness and impact on the development of Orthodoxy in North America, and emphasized also the rigorous academic standards and full and robust liturgical life offered to seminarians during their training. Church Board President Nick Pribich spoke about the impact his recent trip to St. Vladimir’s made on him, and the other parishioners who had accompanied him.

Archpriest Chad Hatfield with seminary alumni at the gala (photo: Eastern Diocese of America, Serbian Orthodox Church)Alex Machaskee, executive chair of the Board of Trustees at St. Vladimir’s, thanked all those present for their support of the seminary, and he thanked His Grace in particular for his support in the continued growth of the seminary community. He highlighted the historic connection between the Belgrade Theological Faculty and St. Vladimir’s, noting that with the leadership and support of His Grace Bishop Irinej this connection would develop into a profound, working relationship.

To read more about the gala and to see a full photo gallery, visit the website of the Eastern Diocese of America, Serbian Orthodox Church.

Does your parish want to host an event in support of St. Vladimir’s Seminary? Call Matushka Robyn Hatrak at 914.961.8313 x330 or email: events@svots.edu.