OCF to expand staff, board and ministries in 2017

Home/Jurisdictions/OCF to expand staff, board and ministries in 2017
Previous Next

OCF to expand staff, board and ministries in 2017 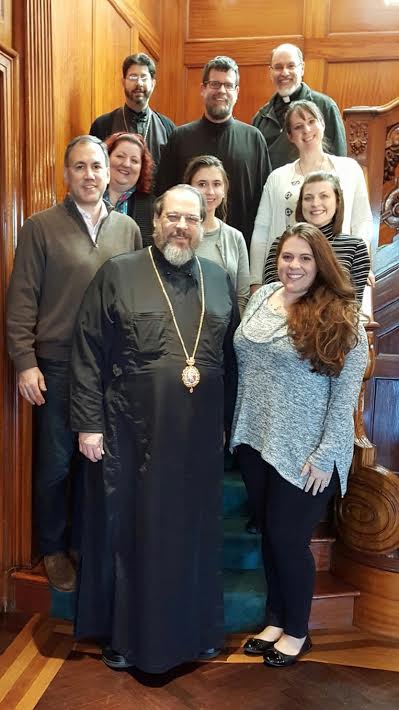 Bishop Gregory of Nyssa with OCF Board members.

Following its annual meeting in December 2016, the Board of Directors of Orthodox Christian Fellowship [OCF] has announced that it is initiating a search for an Executive Director. The process for identifying and screening potential candidates is projected to begin in early February 2017, and details regarding the process and its progress will be made available through OCF’s web site.

OCF is the official campus ministry agency of the Assembly of Canonical Orthodox Bishops of the United States of America. Its mission is to transform the lives of college students in the US and Canada by guiding them along the path to Jesus Christ through His Church, cultivating a campus community of worship, witness, service, fellowship, and education.

Under the leadership of His Grace, Bishop Gregory of Nyssa, the Assembly of Bishop’s Episcopal Liaison to OCF, and James P. Gianakis, Board Chairman, the OCF Board of Directors gathered on the campus of Hellenic College/Holy Cross School of Theology to reflect on the past year’s successes, to affirm the ministry’s commitment to Orthodox Christian college students across the country, and to shape the direction of its various international, national, regional and local programs.

“I would like to thank all the clergy and the faithful of Orthodox Church in America for their continued support of this vital ministry,” said Deacon Alexander Cadman, Chaplain of Penn State University’s OCF chapter, who represents the Orthodox Church of America on the Board and serves as its secretary.  “In 2016, the OCA contributed $12,000.00 in support of the 379 active and emerging chapters on campuses throughout the US. The OCA also funded ten scholarships in the amount of $100.00 each to allow students to attend one of three national College Conferences.”  See related story.

In addition to hiring an Executive Director in 2017, OCF also will expand its Board of Directors by extending invitations to 12 identified candidates. The Board also appointed Priest Miles Zdinak, a current Board member and representative for the American Carpatho-Russian Orthodox Diocese of the USA, to serve as OCF’s National Chaplain.

During the two-day meetings, staff members, Donna Levas and Christina Andresen, and Student Leadership Board President, Emma Solak, presented their respective reports on behalf of the ministry.  Highlights of their reports include the following.

The Rev. Dr. Christopher Metropulos, President of Hellenic College/Holy Cross, also met with the OCF Board to offer his greetings, to reaffirm his support of OCF and its work, and to explore hosting an OCF regional retreat for Boston area students at the campus in 2017.

“Indeed, the meetings proved to be highly productive, setting forth clear goals for the coming year and exciting initiatives to further strengthen OCF in its mission to serve Orthodox Christian students,” Deacon Alexander added.