Home/Ministries/College Conference East | Just Be The Best
Previous Next

OCF College Conference East was a whirlwind of social and religious activities. The conference included church services, a lip sync battle, keynote sessions, workshops, and a banquet. As far as excitement goes, I definitely have to say the banquet won, hands down. What made the banquet so exciting was the dance that took place after a wonderful meal. This was not your normal dance, however, for ethnic melodies were the songs of choice. It was extremely interesting to see various cultures’ styles of music and dancing. It was really neat to see everyone embrace cultural differences as we participated in the Arab dances consisting of stomping and drum beating, the Greek line dances coupled with amazing tricks with a glass of water, and finally, the Carpatho-Rusyn spinning dances to polka music. 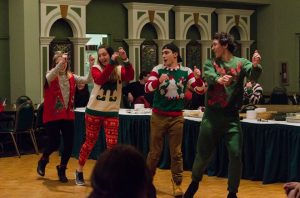 OCFers dancing during the Lip Sync Battle — be sure to check out all of our #CCEAST16 photos here!

Much social fun during the conference was also coupled with great spiritual jubilation. The conference was fortunate enough to be visited by the weeping icon called the Kardiotissa, or Tender Heart. The icon miraculously streams oil and countless miracles are attributed to it–from causing tumors to vanish to allowing people to regain the ability to walk. Feelings of awe and amazement fell among us as we witnessed the miracle of streaming oil in front of our very own eyes.

Aside from the icon and banquet, we had various educational lectures. At the conference, we were lucky enough to be told the secret of life by workshop speaker Jason Catanese. The secret of life is simply to breathe, because our breath has power. With it, we can say things to accomplish great things in the world. Jason also spoke about how we are all called to be priests. He called all of us not literally to be priests, but to be priests by giving back to God using our breath.

This concept is very similar to an amusing yet truthful story told by keynote speaker, Father Timothy Hojnicki. It went something like this. There was a car covered with a peace symbol and Christian bumper stickers such as the fish and a cross. After being cut off, the driver of the vehicle with the bumper stickers had a fit of rage, cursing, screaming, and flipping the bird. A little while down the road, the car with the bumper stickers was pulled over by a police officer. The officer got out of his vehicle and said, “I pulled you over because, after witnessing what just happened and taking note of your bumper stickers, this is clearly a stolen vehicle.”

The moral of the story is that, as Christians, we must set a good example for others as by loving one another and living holy lives as we are representing the church. This is similar to the idea of not just going to church, but actually being the church. We were called to question ourselves, how do others see Christ in me.

Some other ideas talked about during the conference include the theme of “Come and See”. During the conference, we learned to invite others to our churches, and what to tell them when they come. This includes explaining how everything in the church, from the setup of the physical structure to the ceremonies we participate in, have meaning behind them.

For those college students that did not attend College Conference, I encourage you to come next year. The experience I had was truly amazing and eye-opening. In meeting other Orthodox Christians, I have built friendships that are stronger any others I have had previously, and I now have the support of other Orthodox Christians as I face the challenges of college. College students and future college students, I leave you with some parting thoughts from His Grace, Bishop Gregory of Nyssa. He said, “I don’t care what you study. Just be the best and be Orthodox, so then you are the best Orthodox doctor, best Orthodox whatever.”