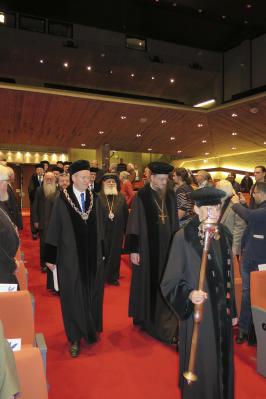 Father John was appointed to the newly created Chair by the Executive Board of VU on September 1, 2016. He retains his position as Dean of St. Vladimir’s, but will visit ACOT a number of times each year to give instruction through intensive courses.

The chair was created to address the need to train new clergy for the growing number of Orthodox parishes in the Netherlands, in the wake of the arrival of a surge of migrants and refugees belonging to the Orthodox tradition. E.A.J.G. Van der Borght, Ph.D., vice-dean of the Faculty of Theology at ACOT, noted, “The creation of this chair in Orthodox theology is in line with the tradition of the VU to study, teach, and reflect critically on one’s own religious theological tradition.”

The schedule of inaugural festivities at ACOT included: a public dialogue about Fr. John’s academic work, titled, “Theology and Scripture”; a Seminar titled,“Orthodox Theological Education”; the inaugural lecture; and a congratulatory reception.

During the inaugural ceremonies Dr. Van der Borght warmly welcomed Fr. John and his family members and briefly sketched his academic biography, saying, “John Behr’s academic education and career connects the academic disciplines of Philosophy, Patristics, and Orthodox theology and the contexts of the Western culture and a deep existential rooting in Eastern Christianity, fed by an ongoing living contact with the sources of early Christianity, that is, the New Testament and the Patristic writing.”

In his laudatio (laudation) of Fr. John’s theological acumen, he noted that his “scholarly originality has been matched by intellectual creativity and spiritual depth.” (Read the full laudatio here.)

Dr. Van der Borght also read a message from the namesake of the new Chair, His Eminence the Most Reverend Metropolitan Kallistos of Diokleia, who could not attend because of frail health. Metropolitan Kallistos taught at Oxford University for four decades, supervising countless doctoral students, including Fr. John. His Eminence is perhaps the most recognizable Orthodox voice in the world, and is chiefly responsible for introducing Orthodox theology to the West.

Please assure Father John and the others present how deeply I am grateful for the significant honour that the Vrije Universiteit Amsterdam has conferred upon me in naming a chair after myself. I wish Father John and future occupants of the chair every success in their lectures. With all my heart I hope that this chair that is to bear my name will contribute positively in making the Orthodox Church better known in Amsterdam and far beyond.
I can think of no candidate better qualified to be appointed to this position than Dr Behr. Ever since the time that I acted as his university supervisor when he was working at Oxford for his doctorate, I have had a very high opinion of his scholarly ability and of the skill with which as a teacher he can communicate his ideas. He is extremely hard-working, genuinely original in his ideas, and remarkably gifted as a writer, as is indicated by his substantial list of publications. I am fully confident that his presence as a member of your Faculty will greatly enhance the work of the Vrije Universiteit Amsterdam.

Special guests among the attendees included His Eminence Archbishop Mor Polycarpus of the Syrian Orthodox Church of Antioch, an alumnus of St. Vladimir’s Seminary; His Eminence Bishop Arseny of the Coptic-Orthodox Church; and the Very Reverend Andrew Louth, emeritus professor of Patristic and Byzantine Studies at Durham University and Honorary Fellow of the Faculty of Theology of VU.