Every month, the OCF social media platforms will be featuring one of the nine regions of chapters. October is the month for the Great Lakes Region, which includes Michigan, Indiana, western Ohio, and northern Kentucky.

On the blog, I’ll be asking the Regional Student Leader–for Great Lakes, the dashing Spiro Morris–for a few names of people in their region who are absolutely rockin’ it. It’s an opportunity for every region to showcase and share that which makes them unique and awesome, and hopefully all the regions can learn from and grow with each other.

So, without further ado, your Great Lakes All-Stars! 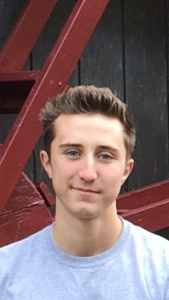 My name is David Schutt. I grew up in Grand Blanc, MI. I attend St. Mary Magdalene Orthodox Church in Fenton. I’m a freshman studying Mechanical Engineering at Kettering University in Flint. I play the piano, I’m an amateur astronomer, I’m an avid reader, and I love the Church.

I’ve always imagined myself being involved in an OCF chapter when I went to college. So when my parish priest suggested that we get one started in Flint, I was more than happy to take the reins. We have four relatively small schools in the Flint area, and there was no OCF chapter. Our chapter is kind of unique, because it isn’t exclusive to only one school. We have members from all the local schools.

What is your greatest memory/experience from OCF?

The Flint chapter is only a few months old, but we’ve already had lots of fun. One of the best experiences I’ve had was our first trip to the soup kitchen. I had been to soup kitchens before, but there was one guy we met who really made our day. When we were finally cleaning up, one of the people we had served went up to us and sincerely thanked us. He said he eats there everyday, but he wants to serve the poor, too! This man was probably homeless and desperate himself, and he wanted nothing more than to serve other people like him.

We’ve got lots of stuff going on in our chapter. My sister is a member of our OCF, and she’s also the FOCUS ambassador for the Flint area. So recently we’ve been working with FOCUS to do charitable things around the community. Just last week we made 100 Christmas cards for less-fortunate kids. Meanwhile, I’m trying to get some students from our chapter to sign up for the Midwest Conference (which I’m really looking forward to). Also, we finally established a new bank account. And I’m trying to iron out some of the details for our next meeting. Nothing that exciting right now, but we’re doing well!

Any advice you could give to someone else in your position (Chapter Pres., District Leader, etc) across the nation?

At our chapter we rotate between “fun” meetings, educational meetings, and charitable meetings. I think it’s a good strategy because we’re doing something new every time and we can generate interest for OCF with our fun meetings. I don’t think we would be as successful if it wasn’t for that mixed schedule. However, we have been struggling with our attendance. We’ve got about twenty people on our email list, and sometimes we only have two or three at the meetings. I’m trying to think of new ways to motivate people. That’s our biggest problem, and I think it’s the most important thing for a chapter leader to watch out for. 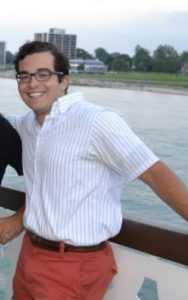 and Spanish. Just accepted into dental school at the University of Detroit Mercy. One hobby includes melting and casting metal in my backyard.

I was born into the church and was involved in almost all of the ministries throughout high school. However, until my freshman year, Orthodoxy was something nice that required you to go to church on Sundays and that was it. As I entered college, I realized my understanding of Orthodoxy was very limited and that I had a choice. I could either learn about and embrace the faith, or I could brush it aside. I chose to follow the faith and study it along with byzantine chant. I did not know that there was a group dedicated to college ministry. My freshman year, I had made some Orthodox friends who told me they had gone to something called College Conference. This intrigued me and I looked into it further. This is how I discovered OCF. By my sophomore year, I wanted to start a chapter so that I could bring together Orthodox students and to tell other about the faith. By winter of my junior year (January 2015) our chapter was officially recognized by the school and the national board. This year I applied and was given the position of the Eastern MI District leader.

What’s your greatest memory/experience from OCF?

College Conference 2015.  I learned so much about the faith and was able to meet many wonderful people from all over the country.

We just had our district retreat two weeks ago. We also just hosted a Day of Light scheduled as a way to get people together right before finals started to pray together for a good end to the semester and the year.

Any advice you could give to someone else in your position (Chapter Pres., District Leader, etc) across the nation?

Don’t get discouraged. It can be very difficult to get people to participate. My school is 90% commuter and the majority of students do not stay on campus after their last class, so finding a good time to meet is difficult. Keep having events,  keep encouraging people to come, and results will come. As a district leader, keep reaching out and work on just being friends with the chapter presidents.