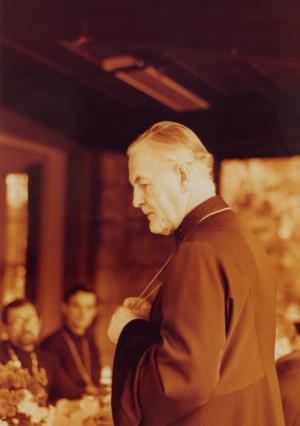 Fr. Alexander SchmemannOn Monday, December 12, at 4:30 pm, in the Seminary’s Three Hierarch’s Chapel, immediately prior to Great Vespers, the annual memorial service (panikhida) for the repose of Protopresbyter Alexander Schmemann of blessed memory will be held.

Father Alexander was Dean and Professor of Liturgical Theology at St. Vladimir’s Seminary from 1962–1983 and was instrumental in educating a generation of Orthodox priests. During his tenure, the Seminary achieved wide recognition as a center of Orthodox theological studies

Besides teaching at St. Vladimir’s, he held positions as adjunct professor at Columbia University, New York University, Union Seminary, and General Theological Seminary in New York, and was a popular guest lecturer at many universities throughout the country. He was also active as a representative of the Orthodox Church in the ecumenical movement, and held positions in the Youth Department and the Commission on Faith and Order of the World Council of Churches.

Father Alexander published more than a dozen books which received wide circulation, including For the Life of the World, Introduction to Liturgical Theology, Ultimate Questions, and Church, World, Mission, and numerous articles and tracts. For the Life of the World, a volume on Christian faith as reflected in liturgy, has been translated into numerous languages and remains one of the most popular works on Orthodox Christianity for the general public. His major study, The Eucharist, was completed only weeks before his death.

On the anniversary of his death, December 13th, words from his work The Services of Christmas: The Nativity of Our Lord Jesus Christ (eds. David Anderson and John Erickson, Department of Religious Education, Orthodox Church in America, Syosset, New York, 1981) remind us of his vibrant faith and hope in the Lord Jesus Christ.

“Christ is born, glorify Him!”

With these words something changes in our life, in the very air we breathe, in the entire mood of the Church’s life. It is as if we perceive far, far away, the first light of the greatest possible joy—the coming of God into His world! Thus the Church announces the coming of Christ, the Incarnation of God, His entrance into the world for its salvation.