Happy November everybody! As you all very well know by now, we feature an OCF region every month–this month, the Northwest Region wears the crown. But instead of doing our usually Regional all-star format, we decided to shake things up a bit, because the Northwest Region recently did something so psychedelic that we just had to share. With that, I turn things over to the Northwest Regional Student Leader, David Munkres:

This year, OCF history was made! You’re probably wondering what hadn’t been done in OCF yet: an annual Northwest Regional Retreat! Shocking, I know. It was the first one in recent memory and a great success. It 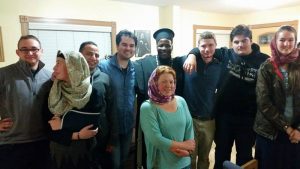 left everyone speechless and renewed, ready to go back to the spiritual trenches of a college campus.

We went to St. John the Forerunner Greek Orthodox Monastery in Goldendale, Wa. It was about five hours away from Seattle, four hours from Portland, four hours from Spokane and seven hours from Boise. A great location to equally inconvenience everyone who traveled. The theme was “Incarnating Christ in the Midst of the Modern World,” and the keynote speaker was THE Abbot Tryphon. Fr. Tryphon is the Abbot of All Merciful Savior Monastery on Vashon Island in Washington. He bought with him Bishop Athanasios from Kenya. The two of them gave a series of talks on Friday night and Saturday morning that left everyone in awe. It was like watching two theological giants waging war and we benefited. Look for the talks to be uploaded to the OCF podcast series (shameless plug for Dan).

We arrived at the Monastery on Friday and got to know one another for a few hours. The bookstore at the Monastery got a lot of money as we bought icons, prayer ropes and books. The Sisters were gracious and let us tour the Monastery and see everything it had to offer. After Vespers, we got to hear His Grace talk about Orthodoxy in Kenya and how he feels inspired by seeing young people engaged in their faith. After hearing his hour long talk, Fr. Tryphon dismissed the adults and Bishop and gave us a small talk about the importance of fellowship. He talked about his 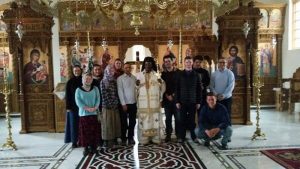 experience setting up an OCF at a college in Seattle and how he loved seeing us get along. He lead some icebreakers and left us to play games and get to know one another/look for an Orthodox spouse.

Saturday was amazing! We got to witness a Bishop celebrating Liturgy at a Monastery. His singing voice gave everyone chills as it echoed throughout the walls of the Church. It was a blessing to see such an amazing service.  After coffee hour, we got to hear from Fr. Tryphon again. His nearly two-hour talk left everyone inspired. It was so quiet you could hear a prayer rope drop. Everyone spent the next few hours just walking around the Monastery and talking as we digested the Abbot’s words. Everyone felt as if they had received a second wind and could be a vessel of Christ’s love to others.

It is as St. Seraphim of Sarov said, “Acquire the spirit of peace, and a thousand 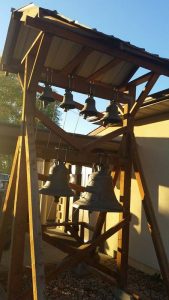 souls around you will be saved.” This really became clear after hearing this talk, which will be available on AFR in the near future. Later, we did a service project by helping to renovate the area where the goats lived. We moved heavy food containers and dug trenches to re-direct water.  After Vespers, a Sister came by the guest houses and read stories of miracles worked by the Theotokos.  This is a hand-written book that is only at the Monastery.  Everyone left with a sense of awe and a desire to know the Mother of God better.  We then socialized more and went to bed very late. We departed after coffee hour on Sunday.

You can find out more about retreats going on in your region–or, even closer to you, in your district–right here!