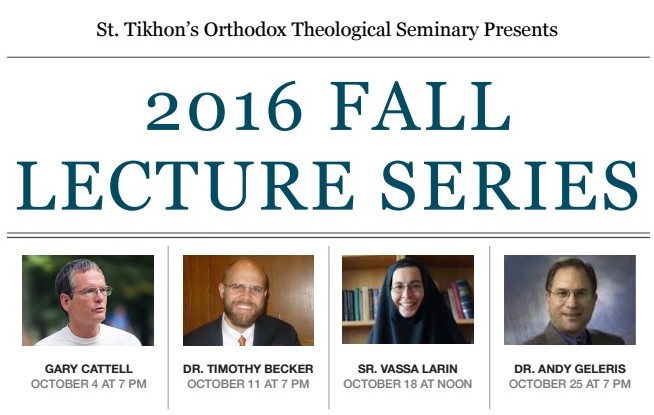 Weekly topics and speakers include the following.

October 4 at 7:00 p.m. — “Understanding Today’s College Students from an Orthodox Street Preacher’s Perspective.”  Gary Cattell, also known as “The Willard Preacher,” began preaching and dialoguing with students at Penn State as a Protestant in November of 1982.  In the spring of 1999, he became an Orthodox Christian.  He now ministers to Penn State students from the perspective of the Orthodox faith.  He is married to Karen, his wife for more than thirty years, and has four grown children and four grandchildren.

October 11 at 7:00 p.m. — “Identity and Knowledge: A Reflection on Leading Reading Groups on the Church Fathers.”  Dr. Timothy Becker, PhD, teaches at the Center for Orthodox Thought and Culture at Eastern University in Philadelphia, where he also leads a popular reading group for anyone interested in the Church Fathers and Orthodoxy.  Dr. Becker will reflect on why and how participation in this communal activity has been transformative for students and others.

October 18 at Noon — “Vocation & Ministry in the Orthodox Church.”  Sr. Vassa Larin, PhD is host of the popular YouTube show “Coffee with Sr. Vassa,” author of various scholarly and popular works, and Professor of Liturgical Studies at the University of Vienna in Austria.  She will explore the intriguing concepts of “ministry” and “vocation” in the context of our post-modern, globalized world.  Have these concepts “changed” in the Internet-Age — an Age of Fluidity?

October 25 at 7:00 p.m. — “Money to Burn: A New (Old) Approach to Christian Stewardship.”  Dr. Andy Geleris, MD, completed medical school and a neurology residency at UCLA and has been a practicing neurologist for 33 years in southern California.  He and his family became Orthodox as part of Saint Peter’s in Pomona, CA, a Protestant congregation that converted to Orthodoxy in 1996.  In his talk, Dr. Geleris will examine how embracing a biblical and patristic vision of generosity can revitalize one’s spiritual life and the Church’s witness to the world.

The public is invited to attend.  Admission for the entire lecture series is $10.00 per person.  Refreshments will be provided.  Please direct questions and RSVPs to Teresa Vaux-Michel, Administrative Assistant to the Dean, at 570-561-1818 ext. 101 or .(JavaScript must be enabled to view this email address).