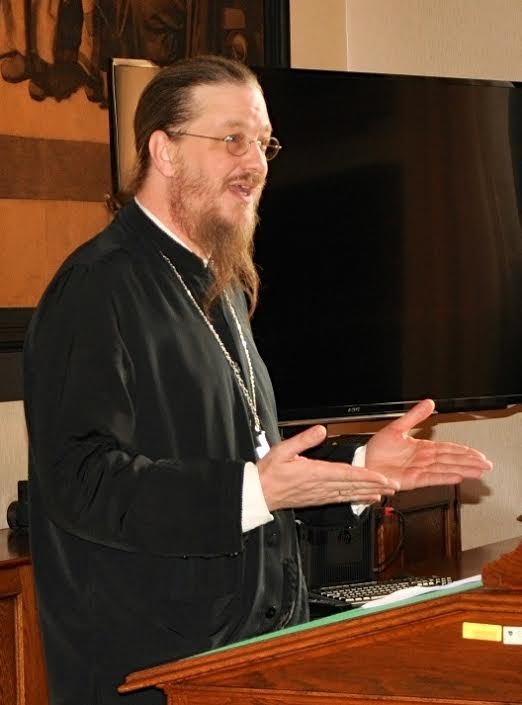 The Amsterdam Center for Orthodox Theology [ACOT] recently that the Executive Board of Vrije Universiteit [VU] has appointed the Archpriest John Behr, Dean of Saint Vladimir’s Orthodox Theological Seminary and Professor of Patristics, to its newly established Metropolitan Kallistos Chair of Orthodox Theology.  In this part-time position, Father John will visit Amsterdam and work at VU a number of times each year as he continues his work at Saint Vladimir’s Seminary.  As a VU professorhe also will be able to supervise doctoral students.

“Besides excellent academic qualifications, Father John brings with him great experience in educating students of diverse backgrounds in an international context,” said Priest Michael Bakker, ACOT Director.  “Our students will serve their communities in a pluralist society, and they need to be able to reflect critically on their own faith.”

There are an estimated 190,000 Dutch residents with an Orthodox Christian background, approximately 55,000 of whom represent the Oriental tradition—Armenians, Copts, and Ethiopians.

“In 2015, the Dutch Minister of Education decided to grant VU a special budget to educate clergy for these growing churches,” Father Michael explained.  “At the time of Father John’s inaugural lecture at VU on Friday, January 13, 2017, details will be provided about ACOT’s Orthodox programs.”

Professor Wim Janse, Dean of ACOT’s Faculty of Theology, added that “a full and dedicated chair in Orthodox Theology broadens and enriches our academic horizon.”

Father John received his doctorate in 1995 from the University of Oxford after being supervised by Metropolitan Kallistos Ware.  His doctoral work, which examined issues of asceticism and anthropology, focused on Saints Irenaeus of Lyons and Clement of Alexandria and was published by Oxford University Press.  Father John also founded the Formation of Christian Theology series at Saint Vladimir’s Seminary Press, which includes his books The Way to Nicaea and The Nicene Faith.  His subsequent book, The Mystery of Christ: Life in Death, synthesized those studies.  More recently, Father John published a poetic, meditative work titled Becoming Human: Theological Anthropology in Word and Image, and a detailed study titled Saint Irenaeus of Lyons: Identifying Christianity.  He has completed a new edition and translation of Origen’s On First Principles.  Currently is working on a new edition and translation of the works of Saint Irenaeus of Lyons and on a book on the Gospel of Saint John.