Home/Seminaries/Meet Our New Music and Liturgics Faculty!
Previous Next

“Our goal is to prepare newly ordained priests for the most challenging circumstances imaginable, and those certainly would include liturgically challenging situations,” remarked the Very Reverend Dr. John Behr, dean of St. Vladimir’s Orthodox Theological Seminary. “That’s why we’re restructuring our music and liturgics courses for our Master of Divinity students—because we’re finding they sometimes end up in parishes with no deacon, no chanter, no choir director, and perhaps even, no choir!” 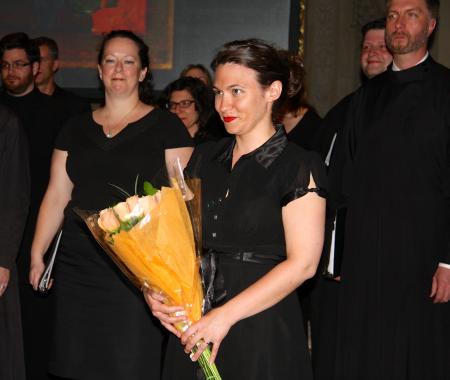 “To meet such new challenges, the Seminary has hired Robin Freeman as its new Director of Music, Harrison Russin as its new Lecturer in Liturgical Music, and the Very Reverend Dr. Eric Tosi as its new Assistant Professor of Liturgics,” announced Fr. John. “All three will begin teaching at the start of Fall Semester, August 29, 2016.”

A conductor and singer, Matushka Robin Freeman holds a Bachelors of Music in Voice Performance from Gordon College and a Masters of Music in Choral Conducting from Indiana University. She has worked with a wide range of choirs, including professional chamber choirs, church choirs, children’s choirs, community choirs, college choirs, and opera choruses. As a singer, she has travelled across North America and Europe, and in Asia, performing a wide variety of repertoire that includes opera, chamber music, and jazz.

Matushka Robin joined the St. Vladimir’s faculty in 2012 as Lecturer in Liturgical Music, teaching courses in beginning and advanced conducting. She conducted the St. Vladimir’s Seminary Chorale in three concert programs, two of which were presented in New York City: ORIENT: Sacred Song and Image; Lex orandi, lex credendi: As we pray, so we believe; and Heaven and Earth: Sacred Music from the Byzantine Greek and Slavic Eastern Orthodox Traditions. Under her direction, the Chorale also published two recordings with St. Vladimir’s Seminary Press (SVS Press).

In addition to her work with the choirs of St. Vladimir’s Seminary, she was engaged by The Princeton Festival, a multi-dimensional performing arts summer festival, for several seasons, as Chorus Master, Assistant Conductor, and Assistant to the Artistic and General Director. In 2015, she served as the Chorus Master for the Festival’s production of Mozart’s Le Nozze di Figaro, to critical acclaim. She has also served as the Director of Music at Holy Trinity Russian Orthodox Church in Yonkers, NY.

“I consider it a joy and a privilege to be a member of the music faculty at St. Vladimir’s, which has a long and well-known history of musical excellence,” said Mat. Robin. “I’m grateful for the opportunity to serve the seminary community in this new role.

“I want our ordained graduates to have the confidence to sing the liturgical services alone if necessary,” she explained. “And, I want them to be competent enough to organize the music and to direct, for example, a small, struggling choir at a vespers service—feedback from our alumni indicates they often face such circumstances in both mission and established but aging parishes.” 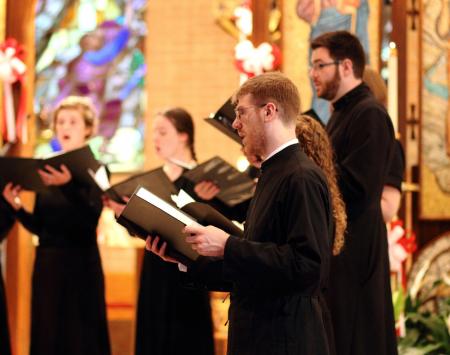 While acting as Lecturer in Liturgical Music as a Dean’s Fellow, Mr. Russin also will be finishing up his Ph.D. in Musicology from Duke University. “Although my doctoral dissertation is typically academic—it’s entitled ‘The Polyphonic Credo, 1350–1500’!—my new assignment at the Seminary will be hands-on and will deal with the nitty-gritty basics of liturgical choral singing,” he said.

“I’ll be teaching one skills course per week and other musicology courses as my part-time ‘Dean’s Fellowship’ position allows,” he explained, “and I’ll be rehearsing the male choir weekly, as well as directing them both in our Chapel and on parish visitations. I’ll also direct other choral ensembles when necessary.”

Mr. Russin was St. Vladimir’s Seminary’s Class Valedictorian in 2013. He earned his Bachelors of Arts in Music at Swarthmore College in 2009, and is the recipient of several scholarly awards, including the J. Fletcher Graduate Fellowship in Music from Duke University in 2015; and “The Promise of the Vatican Library,” a travel grant for Junior Scholars, from Notre Dame University and The Vatican Library in 2016.

“I am honored to return to St. Vladimir’s to assist in musical ministry,” continued Mr. Russin. “The Seminary has, since its founding, been a leader in training church musicians and in publishing new and old music for the Church, and I look forward to helping to maintain the high standard that has already been achieved.”

Also ensuring those high standards will be the Very Reverend Dr. Eric Tosi, another seminary alumnus (M.Div. ’96), and Corporate Secretary of the Orthodox Church in America (OCA) since 2008. Father Eric will be training seminarians how to serve the liturgical services with dignity and grace, and will be imparting to them an understanding of the essential components of the services and the practical application of those components in various church settings. 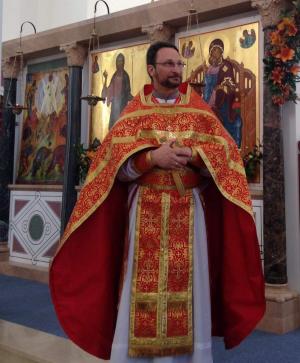 Father Eric earned his Doctor of Ministry degree from Trinity College at the University of Toronto, and his doctoral thesis, which centered on his passion for missionary work, was titled: “Koinonic Evangelism: A Case Study of the Theology and Practice of Evangelism in Three Parishes of the Orthodox Church in America.” Father Eric himself has had experience as a pastor in both mission and established parishes: St. Nicholas of South Canaan Orthodox Church in Billings, Montana, and St. Paul the Apostle Church, in Las Vegas, Nevada, respectively. Since 2013 he also has been the manager of the OCA’s Parish Mentorship Program at the Seminary, which places senior seminarians under the mentorship of seasoned priests in local parishes.

“I am so very pleased to be joining the faculty of St. Vladimir’s Seminary on a more permanent basis,” Fr. Eric remarked. “The Seminary has been a part of my life since I was a young teen, and every time I am here, I feel I am ‘home.’

“To be appointed to this position and to continue to train future clergy, following the footsteps of the great teachers who have taught here…well, this is an honor,” he said. “I pray we faculty build upon their foundations and continue to provide the Church with quality leaders and clergy.”

Note: St. Vladimir’s Seminary thanks Hierodeacon Herman Majkrzak for doing a yeoman’s job as its Director of Chapel Music and Lecturer in Liturgical Music from 2010 to 2016, and wishes him well as he leaves to fulfill his vocation at St. Tikhon’s Monastery. Before his departure, during the school’s 2016 Commencement Exercises, Fr. Herman was presented with the “St. Macrina Award for Excellence in Teaching,” an honor bestowed by the student body.