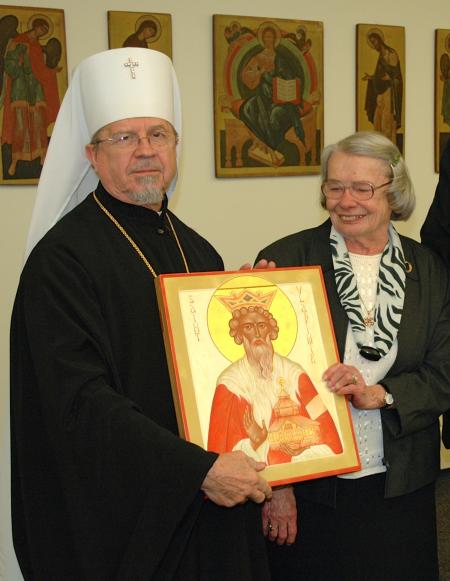 Mrs. Elsie Skvir Nierle, receiving the honor of the title, “Trustee Emerita” from then Board President His Beatitude Metropolitan Herman.

Seminary Trustee Elsie Skvir Nierle fell asleep in the Lord on Sunday, July 17, 2016, just two weeks after her 89th birthday. She had served on St. Vladimir’s Seminary’s Board of Trustees from 1994–2005. Upon her retirement from board service, His Beatitude Metropolitan Herman (then president of the Board) and her fellow trustees honored her with the bestowal of the title, “Trustee Emerita.”

“Elsie was an exceptionally generous woman who understood that the every ‘house’ needs a firm foundation,” said Theodore Bazil, senior advisor for Advancement at the Seminary, “and she funded numerous programs and projects for the Orthodox Church in America (OCA) and its seminaries.”

Additionally, in 1986 she established The Mary Skvir Memorial Scholarship Fund, named in honor of her departed sister; interest income from that scholarship fund is distributed equally between students at St. Vladimir’s Seminary and St. Tikhon’s Orthodox Theological Seminary. In 1986, she also established “The Father John Skvir Memorial Pastoral Fellowship Endowment of The Orthodox Church in America.”

In her professional life, Mrs. Skvir Nierle was a practicing nurse, having graduated from the Diploma School of Nursing, Thomas Jefferson University Hospital, in 1949. As well, she was a nursing instructor at the University of Pennsylvania. Additionally, she served on The Ganister Orthodox Foundation Committee of the First Community Foundation Partnership of Pennsylvania, a charitable organization that supported the special projects of many Orthodox Christian non-profits, including projects at St. Vladimir’s Seminary.

Mrs. Skvir Nierle was a long-time member of Holy Cross Orthodox Church, Williamsport, PA. A schedule of funeral services will be posted when available.