PLANTING GRANT MISSIONS:&nbsp; The practical side of mission life!

Home/Jurisdictions/PLANTING GRANT MISSIONS:&nbsp; The practical side of mission life!
Previous Next

PLANTING GRANT MISSIONS:&nbsp; The practical side of mission life! 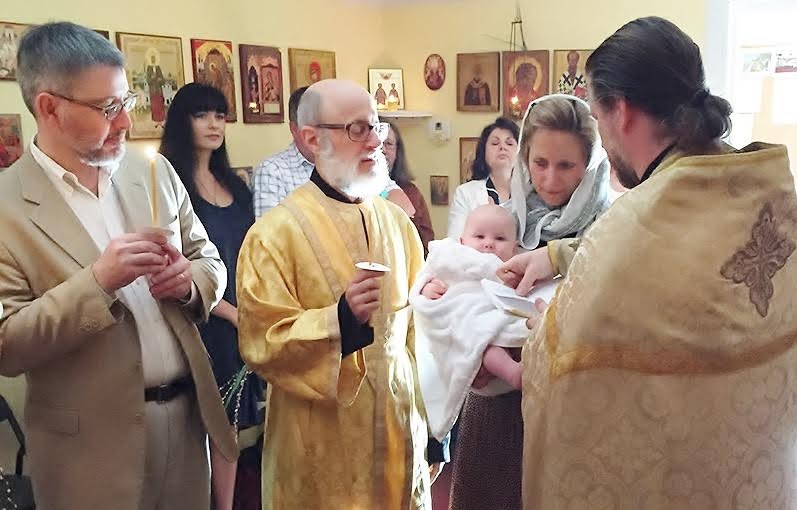 Growing—one soul at a time: A family is received into the Church.

“Typically, updates on the Orthodox Church in America’s planting grant missions are upbeat and focus on the all the positive aspects of newly planted communities and ‘mission life,’” according to Priest James Bozeman of Saint James Mission here.  “I would like to present a different aspect of mission life—or, at least, the practical side of life at our mission church in Beaufort.”

Father James began by recalling how “a couple of years ago, on Holy Friday evening, it was raining ‘cats and dogs,’ as they say here in Beaufort—a bit of an inconvenience for us at Saint James as the roof on our humble, little rented building tends to leak a bit.”

In exchange for what Father James called “an incredible deal on our lease,” the mission’s faithful have taken on the responsibility of making repairs to their building.  Every now and then, he added, the faithful must climb up on the roof to track down the latest leak—something that they consider a part of practical mission life.

“On that Holy Friday evening, we began services under a flood watch, and it was pretty clear from the outset that there would be no procession outside on that particular evening,” Father James continued.  “Halfway through the service, cell phones around the nave began ringing as a result of an automatic ‘flash flood warning’ issued for our county.  We were in no danger where we were, but the rain seemed endless. 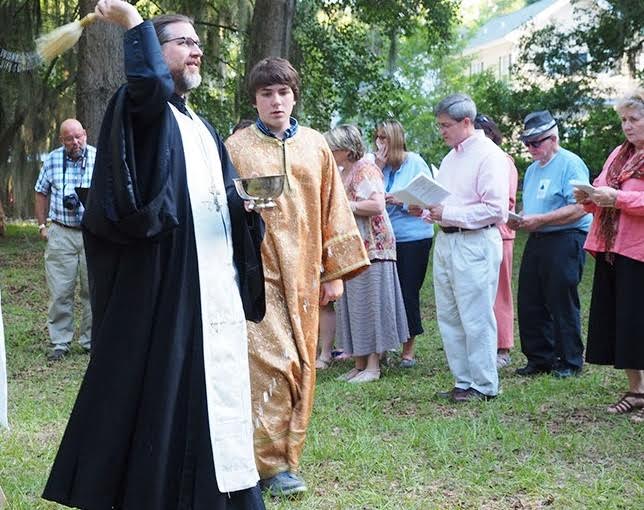 Fr. James blesses site on which a permanent church will be built.

“After the service, Archpriest Michael Matsko—a retired priest who on occasion serves with me at Saint James—said rather matter-of-factly, ‘Father James, it’s raining in your office.’  Indeed, there were three separate leaks!  The only response that I could think of was to shrug and smile casually and say, ‘No big deal, Father Michael, that’s how it is in a mission church.’  Mission life is not without its interesting moments.”

If it isn’t the roof, Father James observed, it’s the air conditioner.

“Ours is currently ‘on the blink,’ leaving the inside of our church a balmy 93 degrees during the heat of the day,” Father James chuckled.  “This has forced us to work around the problem and celebrate services in homes in the meantime—no big deal, as we improvise and move forward.”

But, as Father James was quick to add, the life of a mission church isn’t always about poor architectural infrastructure and “making do.”

“It’s also about dealing with changes that hit a small group—perhaps a bit harder than they do a larger, more established parish family,” he said.  “We are facing the loss of two of our most dedicated families due to job changes.  This would be enough to hurt any church family, but small mission churches struggle even more to fill the gaps left behind when people leave, and to deal with the loss of fellow mission-builders and friends as they move on.

“Don’t misunderstand me here: these aren’t complaints,” Father James explained.  “Struggling is the reality of life in the Church, whether you are a mission or a large, established parish.  And all of these things provide opportunities for a mission to grow as a family and to grow into a fully-fledged parish.” 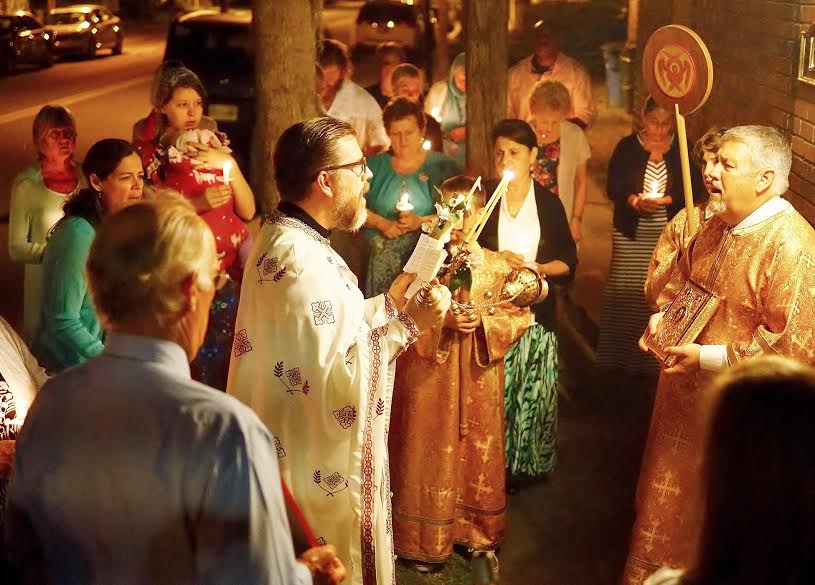 “In those four years, we believe that God has been incredibly gracious with us,” Father James said.  “But lately it seems that the Lord has seen fit to send us some new challenges to stir us up and to cause us to cling more firmly to Him.

“As I was preparing this article, I shared my thoughts concerning our mission with another priest,” Father James related.  “I told him that I was not sure what to say about our current situation, that we are really struggling in many ways.  His response was a good one—‘Mission life isn’t all about singing Kumbaya around the campfire.  It’s tough.  Find something within it that is worthy to share.’

“It’s interesting that he referenced that old spiritual ‘Kumbaya,’” Father James continued.  “Saint James Mission is located in the heart of the ‘Gullah’ cultural center.  The Gullah culture has its roots in Africa and in slavery here in the Old South, and ‘Kumbaya’ is a Gullah word-phrase meaning ‘come by here.’  It’s a prayer in times of trouble, doubt and turmoil, in which one asks the God Who is ‘everywhere present, filling all things’ to be present in the midst of our struggle.  Perhaps, in the end, mission life is indeed all about singing ‘Kumbaya.’”

“Come by here,” said Father James, seems like “an appropriate prayer for mission churches as they work to establish a firm foundation for the Church in places where Orthodox Christianity seems like a novelty and is largely unknown.  It seems an appropriate prayer for members of new communities to pray as they struggle to support their priests and their nascent missions.  ‘Come by here, Lord!’”

The OCA’s Church Planting Grant program has made it possible for Father James and Beaufort’s faithful to plant and grow a mission community in a region in which Orthodox Christianity remains “exotic” and unknown.  And without it, he added, “it is hard to imagine how this mission could have been established.  The heart of our task isn’t to simply build up membership, but to spread the Gospel.  This won’t be accomplished through outreach campaigns, church festivals and classes for enquirers—as good as these things are.  Rather, it will be accomplished as our mission faithfully serves God by patching the roof and fixing the air conditioner, by living out the Gospel through these rather mundane and often frustrating circumstances—so that outreach programs, festivals and classes will be given a firm foundation and that our Church family will establish strong and deep roots here.  And it will be by our faithfulness to our Lord that others will be drawn to Him. 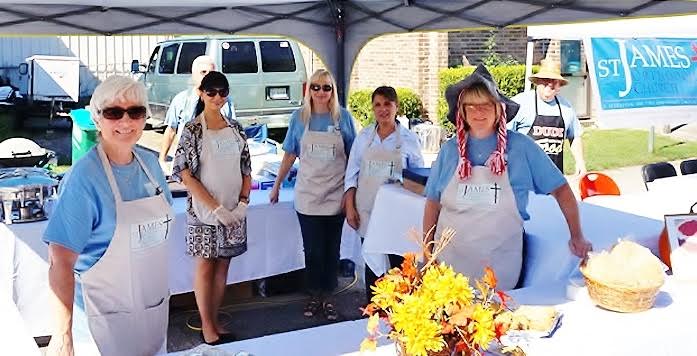 Mission festival demonstrates the Church’s hospitality to the wider community.

“By coaxing and goading our young mission to pray ‘Come by here, Lord’—asking for His presence in our lives as we work through the less-than-glamorous moments of mission life—God guides us toward true participation in Him, toward a true life lived in His Kingdom.  As one of my wonderful parishioners told me recently, ‘Father James, you talk about it as a struggle, but really it is a joy to have the privilege to worship and serve God here.’  What an encouraging thing for a priest to hear—that struggle produces real joy in Christ.

“Mission life has its interesting moments, for which we thank God,” Father James concluded.  “We have a roof, for which we are incredibly grateful—leaks and all.  The air conditioning system, God willing, should soon be back on-line, making the church habitable once again.  In the meantime, we will continue to pray for Beaufort and ask God to fulfill the Gospel through us, in this place in which He has planted us to serve Him.”