There’s A Saint For That : St. Silouan the Athonite

Home/Ministries/There’s A Saint For That : St. Silouan the Athonite
Previous Next

There’s A Saint For That : St. Silouan the Athonite 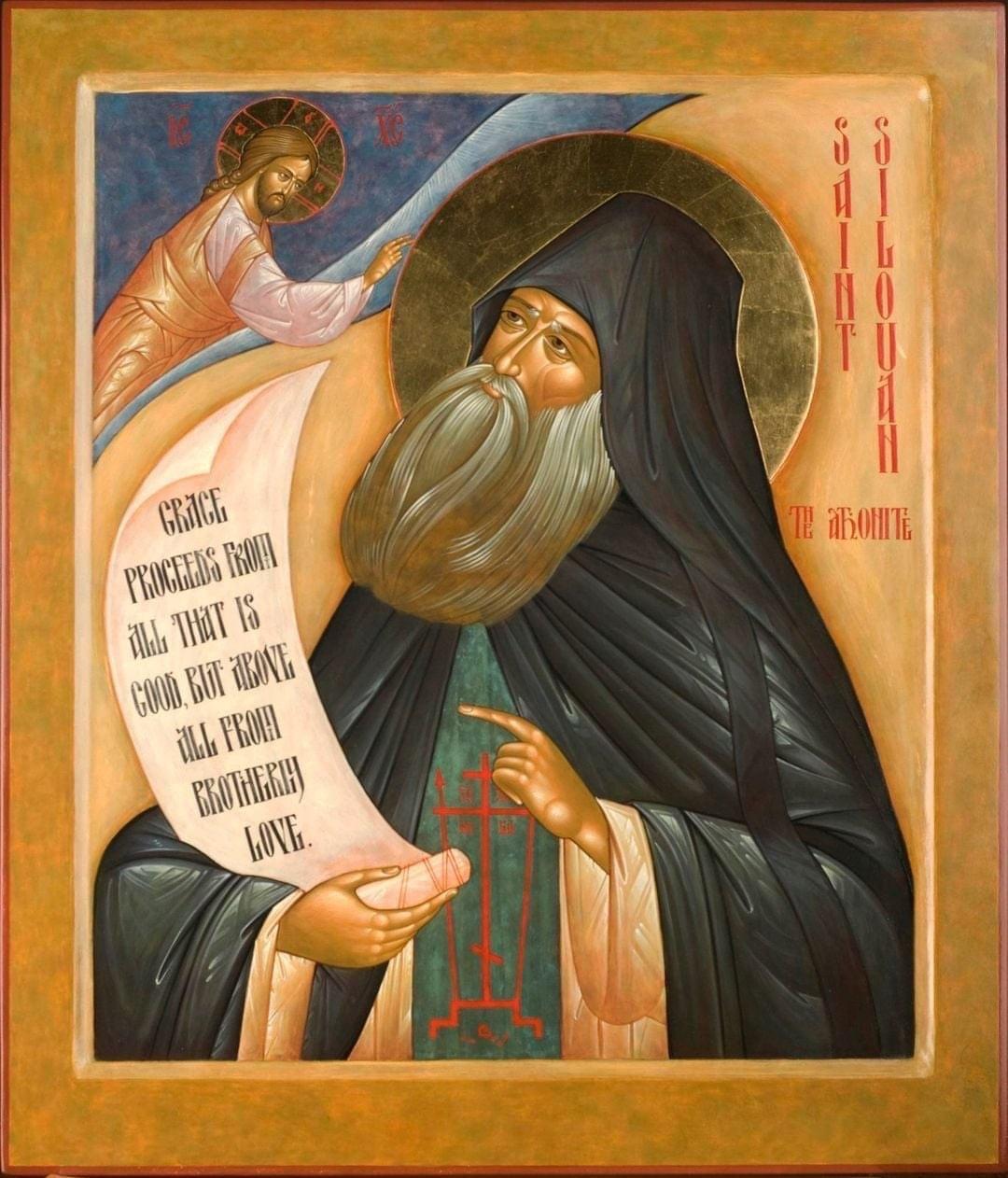 How can St. Silouan intercede for us?

As we can see in his simple yet complicated life, there may be no saint better acquainted with the depths of despair and despondency than St. Silouan. Although our temptation to hopelessness may look differently than Silouan’s, he still understands that same feeling. He was a young man when he first began battling despondency in full force. He is right here with us, and he shows us how to keep getting back up and resolutely place our trust in Christ. When we are perplexed, frustrated, apathetic or catch ourselves thinking or feeling some pretty negative things, we can turn to him as our friend and ask for his help. He in turn can help guide us to Christ and see His light even in the blackest hell. He can lead us by his prayers to the peace and love we find in our Savior Jesus Christ. As his spiritual son, St. Sophrony of Essex, says, “Stand at the brink of despair, and when you see that you cannot bear it anymore, draw back a little, and have a cup of tea.”

St. Silouan was a Russian peasant who traveled to Mt Athos and became a monk in the Russian Monastery of St. Panteleimon. He lived so simply, humbly, and quietly that he might have been forgotten had St. Sophrony (Sakharov) not become his spiritual child and, after the saint’s repose, written a book describing his life and teaching, St. Silouan the Athonite, one of the great spiritual books of our time. It was through St. Sophrony’s efforts that St. Silouan was glorified as a saint.

St. Silouan grew up with pious parents but was himself fairly “wordly” for a long while. When he was still a young man, he almost accidentally killed a man with a single punch. He was immediately remorseful and devoted himself with zeal to repentance. However, this newfound fervor only lasted a few months! He returned to his old ways until he had a horrible dream that demonstrated just how displeasing his way of life was to the Mother of God. Grieved in his soul, he devoted himself again, and this time, through the prayers of St. John of Kronstadt, made his way to the Holy Mountain with a fire burning in his heart, so deep was his repentance.

In the beginning, he made many blunders in the spiritual life but his desire for Christ was stronger than his failures. A torrent of temptations that would have led him to give up this life of prayer assailed him but still he persisted. For six months the attacks never lessened. His spirit failed, he began to lose heart and the horror of hopelessness surrounded him. He thought to himself, “God will not hear me!” He felt utterly forsaken, his soul plunged into the darkness of despondency. Sick at heart, he remained in this black hell for about an hour. That very same day, the Lord appeared to the young novice whose whole being was filled with the fire of the grace of the Holy Spirit. The gentle gaze of the joyous, all-forgiving, boundlessly-loving Christ drew Silouan’s entire being to Himself.

The period of time after this, all was beautiful and lovely. He had within himself a sense of peace, reconciliation with God, and strength to continue on. However, this gradually faded, and he was perplexed and feared losing what he had. He sought counsel from an elder concerning his experiences and worries and received good advice on prayer, but amazed at the spiritual depth of the novice, the man mistakenly praised him as well. Silouan soon found himself struggling with thoughts of vainglory among other things. He fell into despair, despite his perpetual prayer. Having known the peace and grace of the Holy Spirit, his soul grieved, begged, prayed, and wept for the return of that Light. Weary years of alternating grace and withdrawal of grace now set it.

St. Silouan was called to serve as steward to the monastery. Though he now supervised some two hundred men, he only increased his prayers, withdrawing to his cell to pray with tears for each individual worker under his care. For more than fifteen years, he struggled with demonic attacks during prayer until he was almost in despair. At this point Christ spoke to him in a vision, saying “The proud always suffer from demons.” Silouan answered, “Lord, teach me what I must do so that my soul may become humble.” To this he received the reply, “Keep thy mind in hell, and despair not.” St. Silouan made this his discipline in every moment of his life with joy and thanksgiving and was granted the grace of pure prayer. He said that if he ever let his mind wander from the fire of hell, disruptive thoughts would once again plague him. In his humiliation, he was filled with a pervasive love for all — he said many times that the final criterion of true Christian faith is unfeigned love for enemies, and that “to pray for others is to shed blood.”

Adapted from: http://www.abbamoses.com/months/september.html and St. Silouan the Athonite by St. Sophrony of Essex

And even more in this book by St. Sophrony of Essex: https://svspress.com/saint-silouan-the-athonite-new-edition/

By prayer thou didst receive Christ as thy teacher in the way of humility,
and the Spirit bore witness to salvation in thy heart.
Wherefore, all peoples called unto hope rejoice in this day of thy memorial,
O sacred Father Silouan. Pray unto Christ our God for the salvation of our souls.

Apolytikion of St. Silouan the Athonite

O chosen ascetic and earthly angel of Christ, all-blessed father Silouan, most excellent emulator of the fathers of Athos in vigils, fasting and humility! Through thy thirst for God and burning love for Him thou didst acquire abundant grace for thy soul, O most blessed one. Imitating Christ, thou didst crucify thyself with tearful prayer for those languishing in hades, for the living and for those yet to come. Of this thy love deprive us not, who amid the vale of sin ask thine intercession before God and cry out with compunction: Rejoice, O father Silouan, inextinguishable burning of love in thy prayer for the world!

Akathist to St. Silouan, Kontakion I