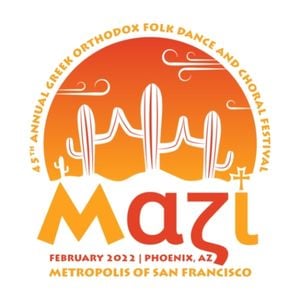 It was a long awaited weekend of Faith, Dance and Fellowship. After two years, the Greek Orthodox Metropolis of San Francisco Folk Dance and Choral Festival returned from February 17 – 20, 2022 in Phoenix, AZ and being together – Mazi – was the focus of the weekend. Longtime friendships were rekindled, new friends were made, and the Valley of the Sun was filled with a display of Greek folk dancing, elaborate costumes, melodious voices, and an undeniable spirit of excitement to be celebrating a weekend of faith and culture marking the 45th Folk Dance and Choral Festival for the Greek Orthodox Metropolis of San Francisco.