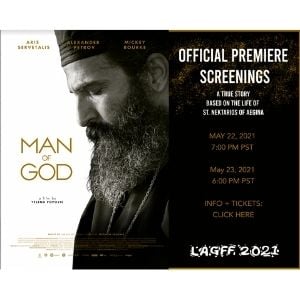 The Los Angeles Greek Film Festival – LAGFF – a festival showcasing films from Greece, Cyprus, and filmmakers of Greek heritage from around the world, will be online and on-demand this year taking place from May 10 – 30, 2021. The 15th LAGFF will proudly present, the exclusive Official Premiere screenings, of Man of God, a film depicting the trials and tribulations of Greek Orthodox Saint Nektarios of Aegina, as he bears the unjust hatred of people while preaching the Word of God.