Who Are We Serving? A Reflection on the Sunday of Orthodoxy

Home/Ministries/Who Are We Serving? A Reflection on the Sunday of Orthodoxy
Previous Next

Who Are We Serving? A Reflection on the Sunday of Orthodoxy 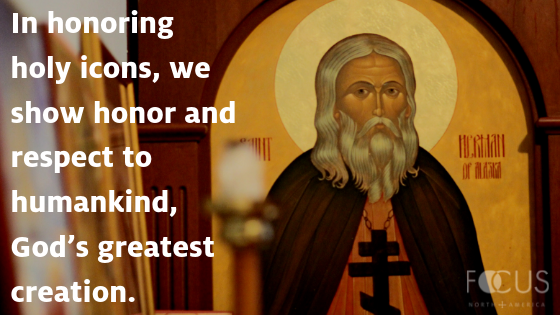 On the first Sunday of Great Lent, we celebrate the restoration of the use of holy icons, holy images, in the Orthodox Christian Church.  In affirming the use of icons at the Seventh Ecumenical Council in 787, the church, at the same time, was affirming the incarnation of Jesus Christ, affirming the fact that the eternal Son of God became truly human and could, therefore, be depicted in His humanity just as surely as we can be depicted in our humanity.  Painting an icon (or writing an icon as many iconographers prefer to say) of Christ in his humanity in no way limits or denies His divinity, which cannot be depicted (to attempt to depict Christ in His deity would, in fact, be idolatry). Sadly, there were those who continued to war against the use of holy icons for the next six decades.  However, after the death of the last iconoclast emperor, Theophilos, his young son Michael III, with his mother, the regent Theodora, and Patriarch Methodios, convened the Synod of Constantinople in 843 to bring peace to the Church and resolution as to the use of icons.  At the end of the first session, all made a triumphal procession to the Hagia Sophia, the Church of Holy Wisdom, restoring the icons to the church. This occurred on March 11th, 843 (which that year was the first Sunday of Lent). The Synod decreed that a perpetual feast on the anniversary of that day should be observed each year on the First Sunday of Great Lent, and named the day, “The Sunday of Orthodoxy.”

It is this triumphal procession which strikes me as I write today.  A procession of faithful believers, holding icons or images of Christ, Mary His Mother, the Saints, scenes from the scriptures including the cross and the resurrection on the third day.

The imagery of the procession reveals something profound – the more notable icons in the procession are not the ones made by human hands at all, but rather, the very people who were carrying the icons themselves.

The historical scene was a procession of icons carrying icons, images carrying images.  In honoring holy icons, we show honor and respect to humankind, God’s greatest creation.  In fact, God is the first and chief iconographer, and we are his masterpiece.

This is how we at the St. Herman House – FOCUS Cleveland and more broadly, FOCUS North America, see everyone we serve, as a masterpiece created by God.

Each day the procession begins, God’s broken masterpieces processing through the doors of St. Herman House and FOCUS North America’s outreach centers seeking food, clothing, shelter, compassion, hope, love, and something of which they may not even be aware, the God who made them, the Savior who died for them.

So let us venerate these icons!  Let us great these images with a holy kiss!  Without such veneration our work is vain, our efforts are misguided, and our understanding of the great nature of our work on behalf of Jesus Christ, the Lover of humankind will be void.

May God richly bless you all on your journey to the empty tomb!

This Lenten Season, join our journey through “40 days with FOCUS,” a special weekly blog series where you will hear Lenten reflections from different servant-leaders who work within our organization. We are excited to share wisdom from the men and women who lead our ministries across the country with love and live out the mission of FOCUS every day in their work and lives. Thank you for reading!