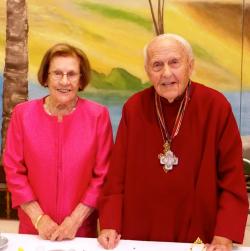 Our seminary’s oldest living alumnus, the Very Reverend Paul Shafran (Class of 1945), was honored on Saturday, October 28, 2017, along with his gracious wife, Matushka Mary, in celebration of the 70th anniversary of Fr. Paul’s ordination to the Holy Priesthood, the couple’s 70th wedding anniversary, and their faithful service to the Church. Although the celebratory event for the Shafrans was held in October, the actual anniversary date of Fr. Paul’s ordination is December 28, and their wedding anniversary date is November 27.