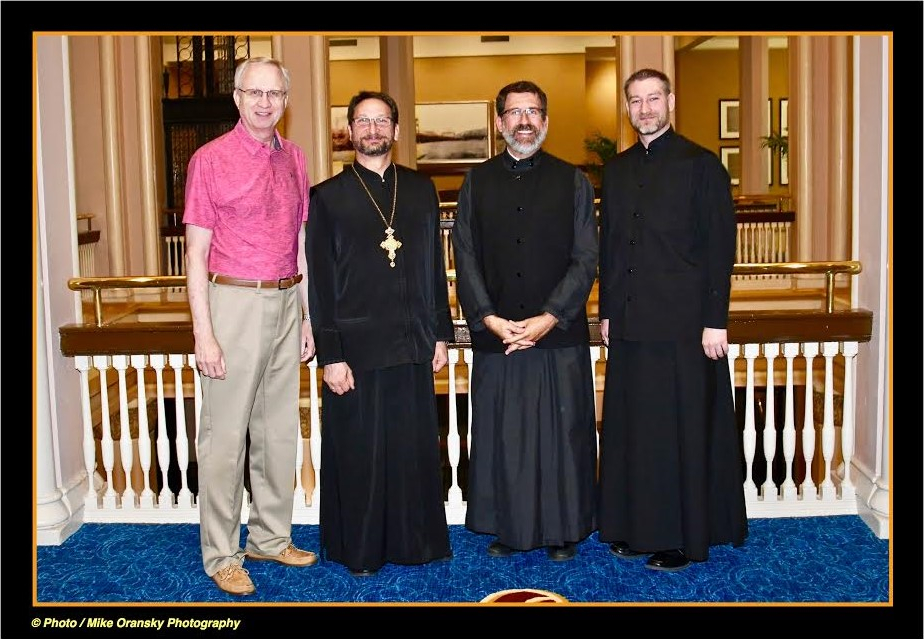 Planning for the 19th All-American Council [AAC] of the Orthodox Church in America, slated to be held in Saint Louis, July 23-27, 2018, took another step forward as the AAC Executive Committee met with local committee chairs May 31-June 1, 2017.

“During the series of meetings with the chairs of the local committees, the AAC’s form has begun to take shape,” said Father Eric.  “The local committee chairs have assembled a wonderful team from the Kansas City Deanery.  All of the committees and chairs have been filled and have begun their work.”

Father Eric describes the local committees as “an integral part of the AAC’s operation—the ‘boots on the ground’ responsible for ensuring that the AAC runs smoothly.”

Also present at the meeting was Carol Deerson, representing the Fellowship of Orthodox Christians in America [FOCA].  The FOCA once again will hold is annual National Convention at the same venue in the days leading up to the AAC opening.  Priest Benjamin Tucci, Minneapolis, MN, Director of the AAC Youth Program, was in attendance as well and toured the facilities and sites for the youth outings during the Council.  He will be soliciting adult volunteers for the program this summer and sending material to parishes to begin the registration process for youth programs.

In addition to meeting with representatives of the AAC venue—historic Saint Louis Union Station Hotel—executive and local committee members interviewed and selected a photographer, a parliamentarian, and an exhibition company.  Committee members also have been in regular contact with the Convention Visitors Bureau of Saint Louis as part of the planning process.

In related news, the Preconciliar Commission met via teleconference on Monday, June 5 to review the planning process to date and to begin work on the AAC agenda, which will be submitted for approval to the members of the Holy Synod of Bishops at their Fall 2017 Session.

Father Eric also announced that the official 19th AAC web site is slated to go live in July 2017—one year before the Council’s opening.

“The web site will have a variety of videos and articles throughout the year to introduce the Council and its theme—‘For The Life of the World’—to the Church, Father Eric said.  “Participants may register for the Council on the web site beginning in January 2018.  All Council material will also be posted on the web site well in advance.”

Father Eric added that an initial mailing for exhibitors, vendors and displayers will be sent out in the next few weeks.

Among other concerns yet to be determined is the slate of AAC speakers, the liturgical services and other events.