Hellenic College Holy Cross Greek Orthodox School of Theology (HCHC) conducted its 75th Commencement exercises on its campus on Saturday, May 20, in the Pappas Gymnasium.

“Surely this is a proud day not only for our school, but most importantly, for the Orthodox Church in America and our society,” said Rev. Fr. Christopher Metropulos, HCHC President. “The young men and women receiving degrees and certificates today will go forward as the new spiritual warriors for Christ and leaders in their chosen fields.” 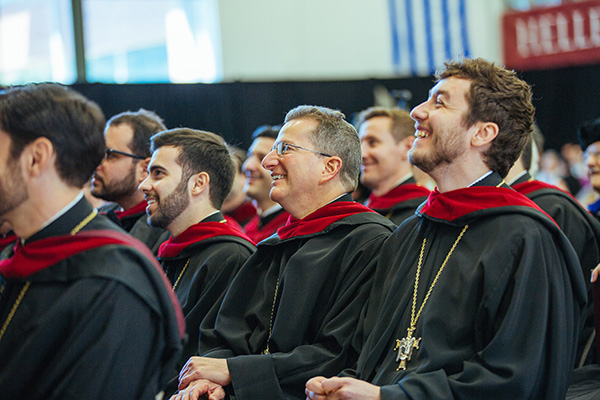 A total of 52 graduates received degrees and certificates, including 18 Bachelor of Arts, 22 Master of Divinity, 9 Master of Theological Studies, and 3 Master of Theology degrees. Two Certificates in Byzantine Music were also awarded. George M. Logothetis, Chairman and CEO of the Libra Group, and Rev. Fr. George Poulos, long-serving pastor of the Church of the Archangels in Stamford, CT, and Pomfret graduate, were awarded honorary doctorates from Hellenic College and Holy Cross respectively.

“It was a joy to honor both Mr. Logothetis and Rev. Fr. Poulos,” continued Rev. Fr. Christopher. “Two men with distinct callings and one spirit in Christ accomplishing so much for the good of civilization in their lives.”

The day began with Orthros and Archieratical Divine Liturgy in Holy Cross Chapel. His Eminence Archbishop Demetrios, Geron of America, Primate of the Greek Orthodox Church in America, was the main celebrant. Present in the altar, as well as for graduation ceremonies, were His Eminence Metropolitan Methodios of Boston, former President of HCHC, His Eminence Metropolitan Savas of Pittsburgh and His Eminence Metropolitan Gerasimos of San Francisco.  Concelebrating clergy included Rev. Fr. Christopher and local and national priests and deacons. A memorial service for the repose of Christine S. Karavites, long-serving HCHC Board member and Secretary, was chanted at its conclusion.

“I truly believe that Hellenic College Holy Cross is really the heart and mind of our Church in America,” said His Eminence Archbishop Demetrios, Geron of America. “May God continue to bless this school and all of its graduates, so that they, together with all of the devout clergy and laity of our Archdiocese, may worthily serve Our Lord and all mankind.” 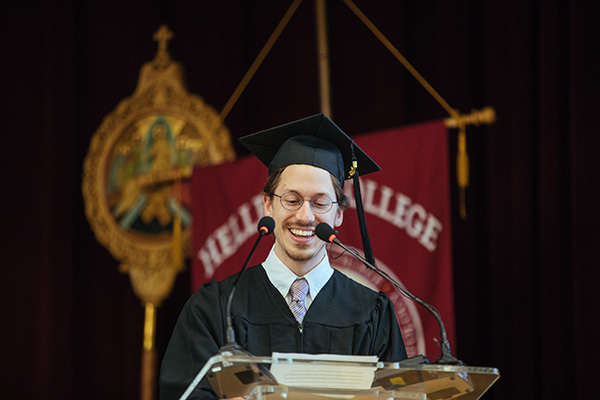 Valedictorians Jonathan Gardner, graduating from Hellenic College, and Bryce Buffenbarger, receiving his Master of Divinity degree from Holy Cross, were received with thunderous applause before and after their speeches. “HCHC is like a garden, with the tree of life planted in our midst,” said Jonathan, who urged his fellow graduates to reflect on the special quality of life on the Holy Hill and “take this sacred time with you.” Bryce described the education he and others have had as “a transformational experience.” Both valedictorians highlighted the strong relationships they and other students have formed here as a gift that will endure throughout their lives. 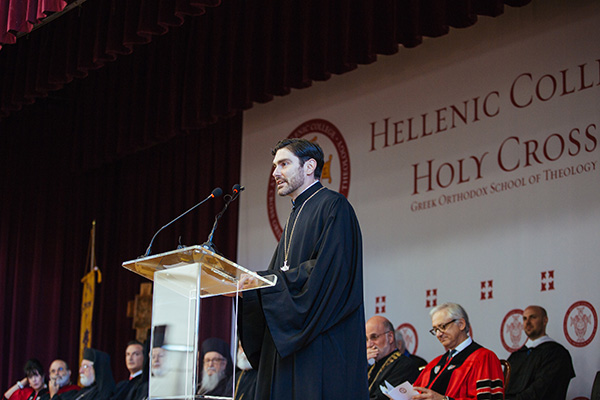 Hellenic College conferred the honorary degree of Doctor of Humanities on George M. Logothetis, Chairman of the multinational Libra Group, for his brilliant entrepreneurship and deep commitment to philanthropy on a global scale. In his address to the graduates, Mr. Logothetis said, “You are at the heart of the moral leadership of the future at a time in the world where there have been progressive erosions to morality. My commencement wish for you is that you all lead not just happy, but worthy lives. To be defined by the wealth of your character and not just the worth of your pocket. To learn to love others and allow others to love you.”

Rev. Fr. George Poulos, unable to attend the ceremony, was awarded the honorary degree of Doctor of Divinity from Holy Cross for his many decades of service to the Church and to HCHC. His Eminence Archbishop Demetrios, Geron of America, paid tribute to him as a “legendary priest” who, as the degree citation states, is “a shining example of what a most devoted priest of the Church and a proud American should be.” 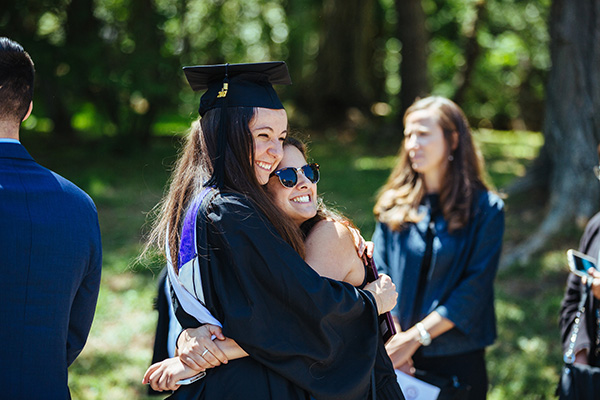