In The News: From Coast to Coast!

Home/Jurisdictions/In The News: From Coast to Coast!
Previous Next

In The News: From Coast to Coast! 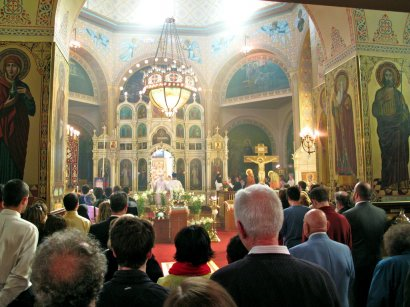 According to Archpriest John Adamcio, cathedral Dean, the weekend celebration will begin on Saturday, June 10 with a tour of the historic cathedral, designed by renowned American architect Louis H. Sullivan.  Vigil, followed by a complimentary dinner in the cathedral hall, will be celebrated at 4:00 p.m.

On Sunday, June 11, His Grace, Bishop Paul of Chicago will preside at the 9:00 a.m. Hierarchical Divine Liturgy.  A banquet will follow at the Carlisle, Lombard, IL.  Guests are asked to RSVP for both the complimentary dinner on Saturday night and the Sunday banquet by June 1 via the ticket order form available on the Cathedral’s web site or by contacting Sue Miller at 847-204-1736 or .(JavaScript must be enabled to view this email address).

What is today Holy Trinity Cathedral traces its roots to the establishment of Saint Vladimir’s Church—believed to be the first Orthodox Christian parish in Chicago—in 1892.  Services initially were held in a house on North Noble Street and later in a rented property on Racine (then Centre) Street near Madison Street.  In 1899 the church’s pastor, Father [now Saint] John Kochurov, commissioned Sullivan to construct a church at 1121 North Leavitt Street in Chicago.  The new edifice was consecrated by Saint Tikhon of Moscow in 1903 and designated a cathedral in 1923.  Father John was martyred in the Bolshevik Revolution and canonized as Saint John of Chicago in December 1994.

In its early years, the cathedral parish served as a catalyst for the establishment of several other Orthodox parishes in the Midwest.  It has been blessed to have had several saints worship in its sanctuary.  It stands today as the center of religious life for many Orthodox faithful and their families and serves as the See Cathedral of the Diocese of the Midwest of the Orthodox Church in America.  It was listed on the National Register of Historic Places in 1976 and designated an official City of Chicago Landmark in 1979.

A pan-Orthodox celebration of the 125th anniversary of Orthodox Christianity in Chicago is being planned for later in the year. 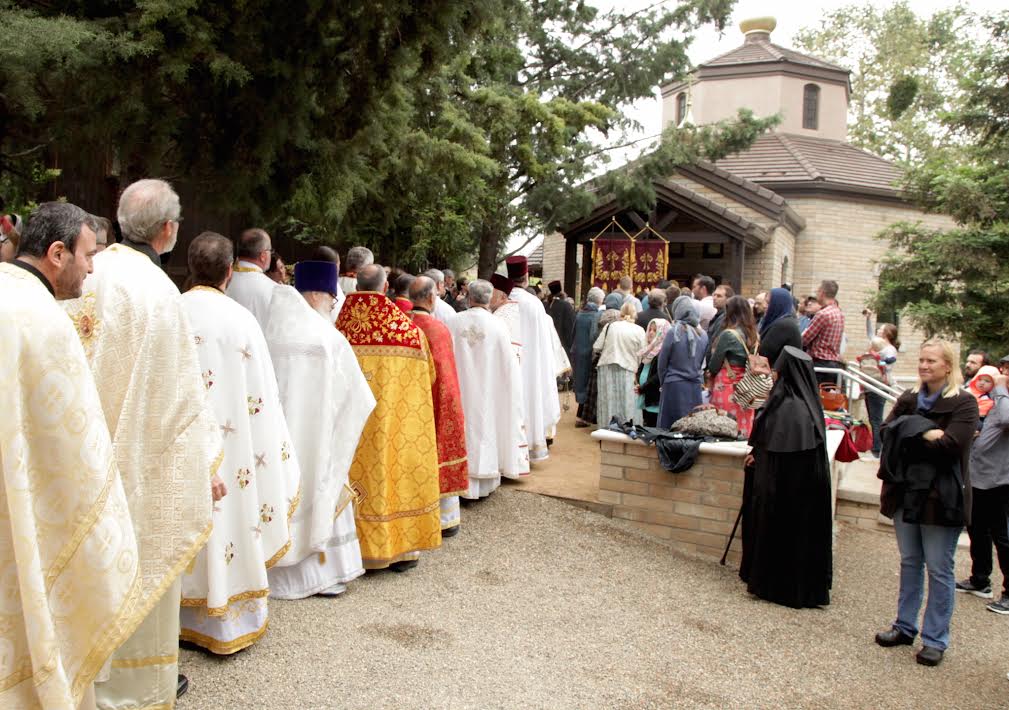 With great joy, Abbess Victoria and the community of Saint Barbara Monastery, Santa Paula, CA, celebrated the consecration of their new monastery chapel, dedicated to the Holy Martyrs Barbara and Eugene, on Saturday, May 6, 2017.  His Eminence, Archbishop Benjamin presided, assisted by His Grace, Bishop Daniel of Santa Rosa and many clergy from throughout California.

Hundreds of pilgrims attended the opening Vigil in the chapel on Friday evening and the consecration Divine Liturgy on Saturday morning. 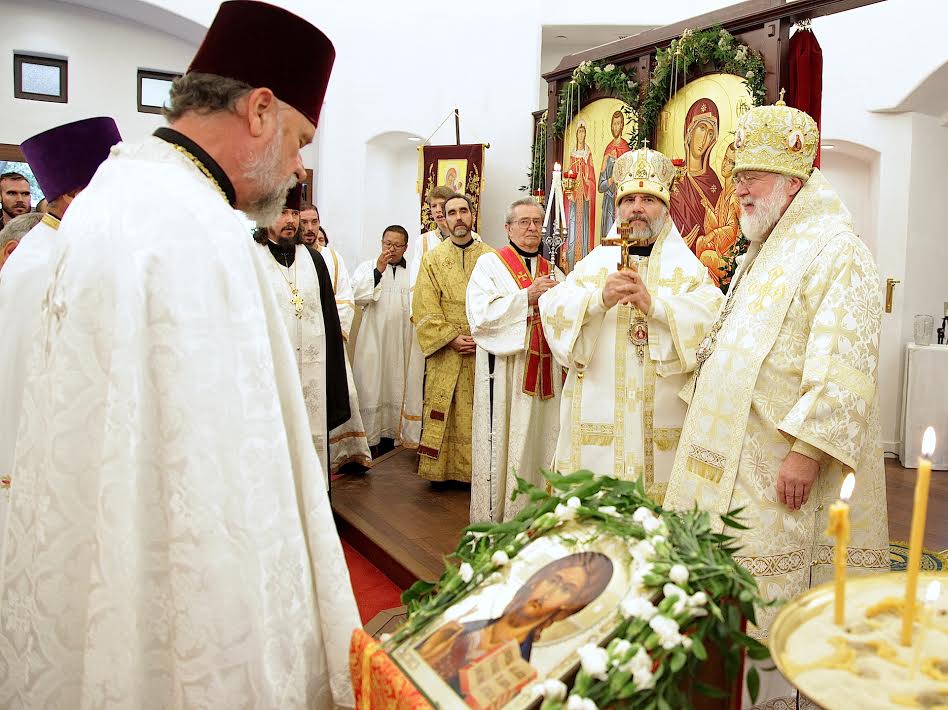 The chapel project began several years ago with a grant from the Diocese of the West of the Orthodox Church in America.  The grant was funded by the sale of the property in Marin County known as Saint Eugene Hermitage, where Archimandrite Dimitry [Egoroff] of blessed memory labored as a monk for some 18 years and where the Monastery of Saint John of Shanghai and San Francisco, now located in Manton, CA, was first established.  To this initial grant, representing about a quarter of the project’s cost, over two hundred donors contributed to the chapel’s construction, offering financial gifts, labor and the underwriting of icons and furnishings.  Additionally, artisans have donated materials, such as bricks, flooring, marble and cabinetry, and assisted in their installation.  The names of these many donors, founders of the chapel, are listed in the monastery diptychs for commemoration.

Project Manager for the chapel construction was Mitchell Denny, Jr., and the principal iconographer is Heather MacKean. 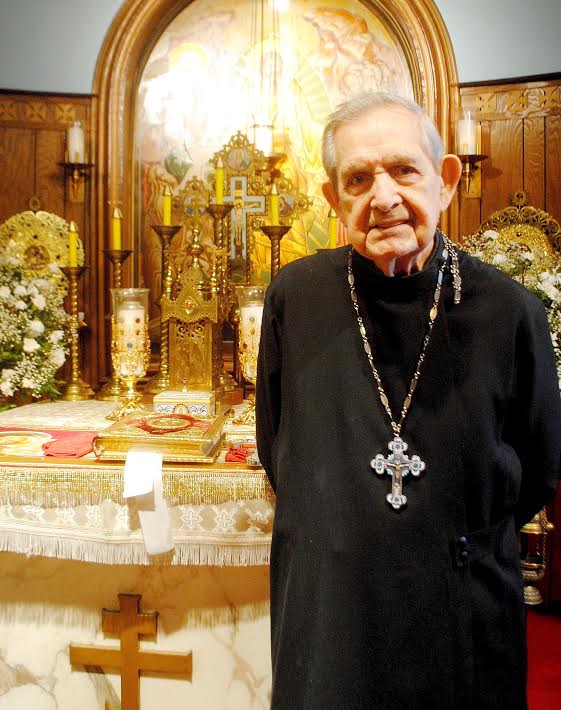 One of four sons born to Mitred Archpriest Gregory and Matushka Anastasia Soroka, Father Igor joined his brothers, Archpriests Vladimir and Leonid, both deceased, in editing and publishing liturgical music books in the English language.  Among their numerous works was the “Red Soroka Vespers book,” employed by generations of faithful across the Orthodox Church in America.

Father Igor graduated from Saint Tikhon’s Seminary, South Canaan, PA in 1946.  After his marriage to Matushka Irene, who fell asleep in the Lord in 2004, and his ordination to the priesthood, he was assigned Rector of Saint Nicholas Church on December 1, 1959—his first and only parish assignment!  According to the Post-Gazette, “at age 91, [Father Igor] is thinking about retirement.”

In addition to his pastoral duties, Father Igor was the Director of the Cathedral Choir of the OCA Archdiocese of Pittsburgh and Western Pennsylvania—a position he held for 50 years until his retirement in 2013.  He also helped facilitate annual choir conferences at Saint Vladimir’s Camp, Farmdale, OH and elsewhere.  In recognition of his contributions to the field of liturgical music, Father Igor was one of the inaugural recipients of the OCA’s Saint Romanos Award in 2014.

May God grant Father Igor many years as he begins this new phase of his life and ministry. 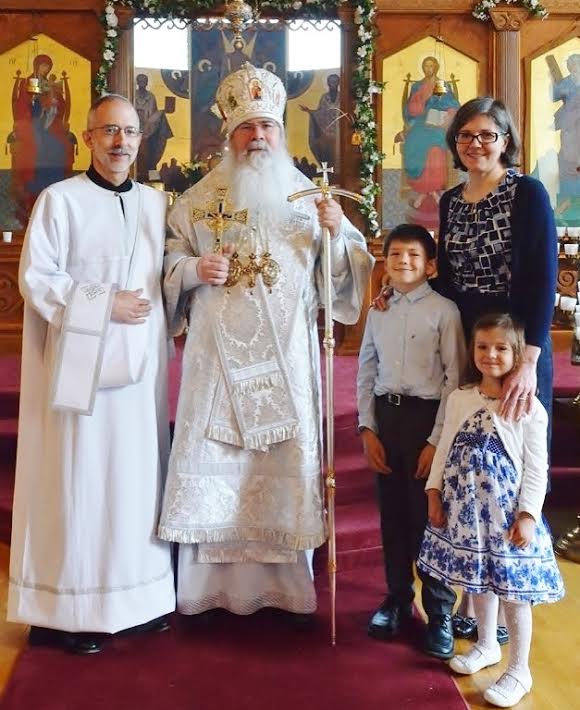 The Fellowship of Orthodox Christians in America [FOCA] helds its national basketball tournament in Weirton, WV April 28-30, 2017 and its 78th national bowling tourney in Baltimore, MD May 5-7.

Hosted by the Weirton “O” Club of Saint Nicholas Church, the basketball tournament attracted teams from Pennsylvania, Ohio, New Jersey and Minnesota who took to the courts in Saturday’s games in neighboring Steubenville, OH.  After the celebration of Vespers, participants attended the tournament banquet, during which FOCA National President Marge Kovach offered a warm welcome and urged the youth to “look around at the friends who surround you because they will be your friends for life.”  Tournament all-stars, chosen by the referees, were announced and received awards.

His Eminence, Archbishop Melchisedek of Pittsburgh and Western Pennsylvania presided at Sunday’s Divine Liturgy, after which the closing championship games were played and awards distributed to the winning teams.

The Vladicon “O” Club of Baltimore’s Saint Andrew Church hosted the bowling tourney, which attracted participants from Pennsylvania, New Jersey, Ohio, Virginia and Maryland.  On Friday evening, team bowling was held at Country Club Lanes, Middle River, MD, while doubles and singles bowling took place.  The awards banquet followed the celebration of Great Vespers.  His Beatitude, Metropolitan Tikhon, FOCA Spiritual Leader, presided at the celebration of Sunday’s Hierarchical Divine Liturgy, during which he tonsured James Magruder, Vladikon “O” Club Vice-President, to the order of Reader before ordaining him to the Subdiaconate and Diaconate.  A 2003 graduate of Saint Vladimir’s Seminary, Yonkers, NY, Deacon James, his wife Laurel and their children Luke and Joanna have been members of Saint Andrew’s for many years.  Having received his Doctorate in Art History from Johns Hopkins University in 2014, Deacon James is a Professor of Art History at the University of Maryland Baltimore County.  He also serves as Saint Andrew’s Parish Council Secretary and Church School Director.  The tournament farewell luncheon followed the Liturgy. 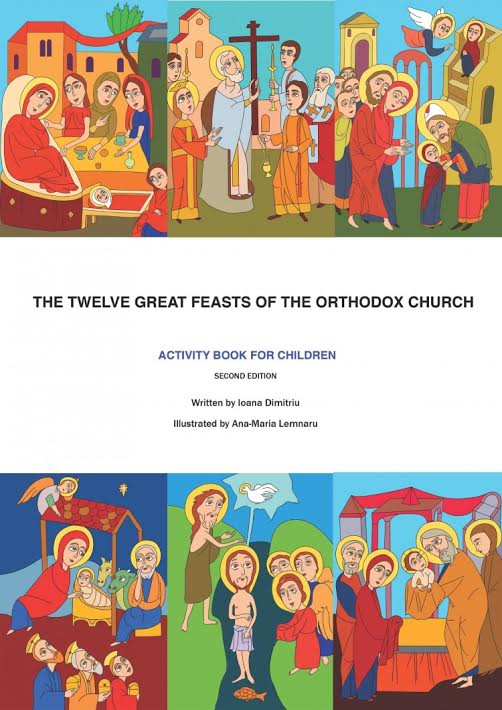 Author Ioana Dimitriu, a Romanian-Canadian member of Ottawa’s Annunciation Cathedral, began writing the activity books after working with youth in rural Orthodox communities in Mexico during the 2014 missionary trip organized by the Orthodox Church in America and the Orthodox Christian Mission Center.  Being a Spanish teacher and a native speaker of Romanian, Ioana was inspired to use her language skills to develop catechetical materials that would benefit Orthodox children in multilingual parishes or who worship in Spanish, French, or Romanian, as well as English.

The first volume—The Twelve Great Feasts of the Orthodox Church—includes accounts of the feasts and numerous engaging activities, illustrations, word games and projects for elementary school children.  The Creed Explained: Brief Introduction to the Orthodox Christian Teachings with Activities for Teenage Readers, introduces tweens to various aspects of the Church’s early history while providing concise explanations of the main doctrinal elements found in the Nicene-Constantinopolitan Creed.  Activities include study questions and written reflections, crossword puzzles, and assessment activities.  Great Lent, Holy Week, and Pascha Activity Book for Children presents a wealth of information and activities primarily geared to the eight to 12-year-old audience.

The books contain beautiful illustrations by Ana-Maria Lemnaru, a young Romanian artist who drew her inspiration from the Byzantine iconographic tradition.

The activity books may be ordered on-line from Lengua Viva.  Additional information is available by writing to .(JavaScript must be enabled to view this email address).