Hellenic College freshman Vasiliki Motsios says that “this was the only out-of-state school I applied to.” Being from Florida, she understandably wanted to stay closer to home—and to better weather than Boston can offer. But Hellenic offered something more important. “I came up for the open house weekend and really liked the whole vibe of the place. Everyone was so welcoming. That really drew me in. And I’d never been to Boston but loved the proximity to a city where there’s lots to do.”

Vasiliki is majoring in Human Development. “I always knew I wanted to help people and the Human Development courses here are so interesting.” Over spring break, she gained hands-on experience helping the less fortunate as part of a team of HCHC student volunteers building houses for the poor with Project Mexico. Back home, she has helped others as a lifeguard for the past four summers and will do so again this year. “It’s something I’m really passionate about,” she says. 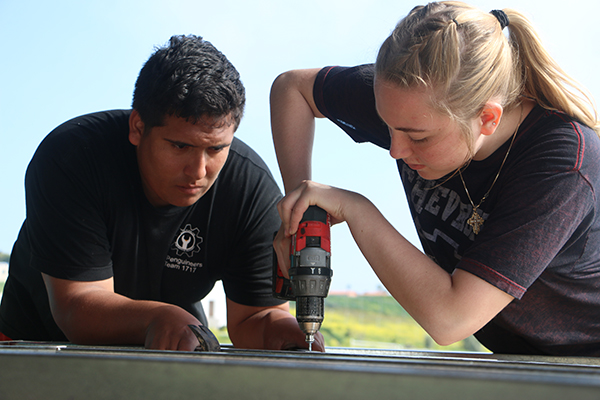 Certified not only to teach swimming to the public but also to train future lifeguards, Vasiliki was the first responder to a potential drowning and saved the swimmer’s life. That would have been satisfaction enough for her, but not for her peers, who nominated her for a county-level “You Rock” award—which she won. Here is just part of what the head of aquatics for Pasco County Parks and Recreation had to say: “I have never seen a teenager go after both certifications so closely together…Vasi does an absolutely outstanding job…She really proved herself recently when she led the response to a medical emergency…resulting in a successful and incredible rescue…”

Asked what she would say to someone thinking about applying to Hellenic College, Vasiliki says she would describe the school as “somewhere you’ll make close friends and know everyone on campus. There are so many things the school offers us, academically and spiritually. You should do what I did and come see for yourself.”