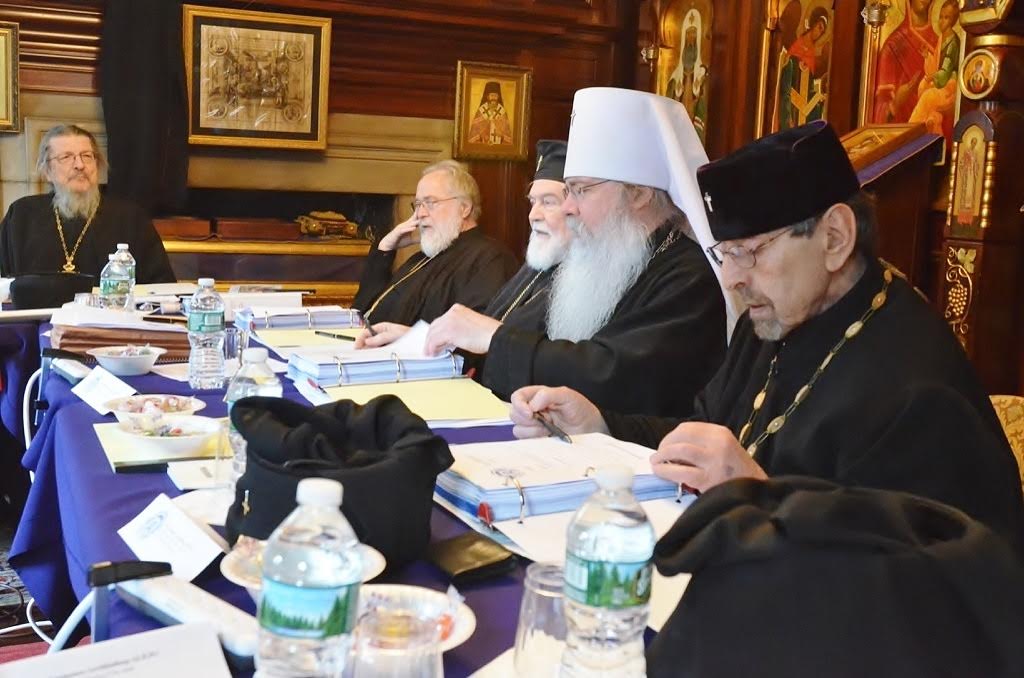 During the Spring Session of the Holy Synod of Bishops of the Orthodox Church in America, held at the Chancery March 28-31, 2017, “For the Life of the World” was selected as the theme of the 19th All-American Council [AAC].

The theme of the AAC—slated to convene in Saint Louis, MO July 23-27, 2017—is based on the seminal book of the same name by the late Protopresbyter Alexander Schmemann, which initially appeared in the 1960s and has established itself as a “classic.”  The AAC logo, which features a cross and Saint Louis’ iconic Gateway Arch, also was approved by the hierarchs.

Following opening services in the Chancery’s Saint Sergius of Radonezh Chapel, His Beatitude, Metropolitan Tikhon addressed the Holy Synod, focusing on his work over the past six months.  He shared the text of a proposed video on the “Four Pillars,” which he had introduced at the 18th All-American Council.

Reports were offered by the OCA’s officers.  Archpriest John Jillions, Chancellor, reported on a variety of matters.  Together with Priest Nathan Preston, Administrator of the Department of Pastoral Life, he noted recommendations for a demographic study of clergy ages and retirements, clergy compensation and recruitment of new clergy.  Also heard was a report on the Office of Review for Sexual Misconduct Allegations [ORSMA] by Cindy Heise, Coordinator, and a report on the Sexual Misconduct Policy Advisory Committee [SMPAC] by Bernard Wilson.  Archpriest Eric G. Tosi, Secretary, also reported on a variety of issues, including the proposed renovation of the OCA Archives storage facilities, ongoing work on the OCA web site redesign and upgrades, and the third OCA Mission School, slated to be held this summer.  The hierarchs approved the publication of a new Metric Book for parish use, which will be released in the near future.  Melanie Ringa, Treasurer, reported on the status of the OCA’s finances, offering a positive update on the shift to proportional giving.  She also updated the Synod on the new finance plan for the All-American Council, in which dioceses, rather than parishes, will be assessed, thereby allowing each diocese to determine its own assessment plan.

Judge E. R. Lanier, OCA General Counsel, updated the Holy Synod on a number of legal matters affecting the OCA.  The Holy Synod blessed the Corporate Signing Policy and the Corporate Gift Policy that had been approved at the Spring Session of the Metropolitan Council.  Judge Lanier further updated the Synod on the status of the adoption of the revised Statute of the Orthodox Church in America and addressed the issue of parish cemeteries.  Also discussed were the matter of an OCA Legal Advisory Team and the OCA’s participation in two amicus curiae cases.  Metropolitan Tikhon thanked Judge Lanier for his service to the Church during the two years he has served as Legal Counsel.

In other reports, Protopresbyter Leonid Kishkovsky, Director of External Affairs, reported on the state and status of world Orthodoxy and relations with Church and other organizations.  He also noted that the search for a new candidate for the OCA’s Representation Church of the Great Martyr Catherine in Moscow is underway.  Archpriest John Matusiak, OCA web site editor, reviewed the OCA’s past and current communications efforts.  Matushka Valerie Zahirsky, Chair of the Department of Christian Education, and Donna Karabin, Chair of the Department of Christian Service and Humanitarian Aid, reported on the work of their respective departments, while His Grace, Bishop David of Sitka and Alaska, Synodal Liaison, reported on the OCA Pension Plan.  Archdeacon Joseph Matusiak offered an update on the Stewards of the Orthodox Church in America [SOCA].  Plans for the appointment of a new Chair for the Department of Youth, Young Adult and Campus Ministry also were considered.

During the four-day session, Metropolitan Tikhon concelebrated the Liturgy of the Presanctified Gifts with His Eminence, Archbishop Alejo of Mexico and His Eminence, Archbishop Irénée of Ottawa on Wednesday evening.  Graduating OCA seniors from Saint Tikhon’s and Saint Vladimir’s Seminaries sang the responses and, together with their wives, engaged in a dialogue with Holy Synod in a question and answer session after the dinner that followed.  On Thursday morning, Metropolitan Tikhon presided at the reading of the Great Kanon of Saint Andrew of Crete, while on Friday morning, His Eminence, Archbishop Melchisedek of Pittsburgh and Western Pennsylvania presided at the celebration of the Liturgy of the Presanctified Gifts marking the Feast of Saint Innocent of Alaska.

A photo gallery will be available on the OCA web site shortly.