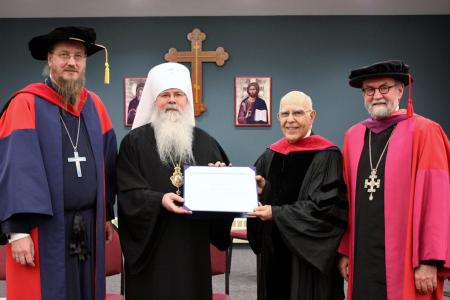 (from left) Dean Archpriest John Behr, Metropolitan Tikhon, Guest Lecturer Dr. Lewis Patsavos, and President Archpriest Chad Hatfield, during the awarding of the honorary doctorate at the 34th Annual Schmemann Lecture (photo: Mary Honoré)When Dr. Lewis Patsavos delivered the 34th Annual Father Alexander Schmemann Memorial Lecture on the topic, “Reflections of a Canonist,” he urged both a holistic approach to the study of the church canons and a living application of them. Theology, he reminded the audience, cannot be isolated from spirituality, or from church life, or from service to and communion with others. Likewise, he advised, proper interpretation of the canons requires not only intent personal prayer but also acute awareness of ecclesiastical consciousness—“the mind of the Church.”

“It is the task of the canonist to interpret the spirit of the canons in a way which conforms to that revelation [of God] as experienced in the twenty-first century,” he reminded his audience. “It is not one’s personal theology or predilection that matters, but the theology which reflects the mind of the believing community, that is, the mind of the Church.”

Dr. Patsavos, who earned his Doctorate in Theology from the University of Athens, Greece in 1974, subsequently taught at Holy Cross Greek Orthodox School of Theology for 40 years. His dual responsibilities of teaching Orthodox Canon Law and directing the school’s Field Education Program enabled him to observe the pastoral nature of the canons contextually in ministerial settings, and he began to discern an essential connection between his two seemingly disparate duties.

“We rejoice in the fact that the greatest Fathers and teachers of the Church have been pastors,” he said. “They have been individuals who are not simply skillful thinkers but more importantly, they have been persons of prayer and participants in the joys and sorrows of human life. Spirituality grows with the experience of the community and with sensitivity to the many complex situations which arise in the life of the community.

“I found as a result,” he remarked, “that the canons were not looked upon as sacred texts to be followed assiduously, but as living directives which speak to the human condition.”

During his lecture, Dr. Patsavos also touched upon two other areas in which his knowledge of canon law are particularly useful: his decades of work in the Orthodox and Roman Catholic Bi-lateral Consultation; and his understanding of the challenges presented to Orthodox churches in the United States as regards ethno-centrism and administrative disunity. Listen to his entire lecture here.

Preceding the lecture, the Board of Trustees and faculty of St. Vladimir’s conferred a Doctorate of Canon Law honoris causa upon Dr. Patsavos. The guest lecturer was deeply moved by the honor, and deeply grateful that two Deans of Holy Cross, Dr. James Skedros and Fr. Alkiviadis Calivas, as well as many friends, were among the audience. “I will wear the hood and color of St. Vladimir’s with great pride,” he said. Read the doctoral citation here.

Also in attendance were His Beatitude Metropolitan Tikhon, primate of the Orthodox Church in American and Chairman of the Board of Trustees of the Seminary, and His Grace Irinej, bishop of the Eastern Diocese of the Serbian Orthodox Church. Metropolitan Tikhon concluded the Academic Convocation and Schmemann Lecture by graciously thanking the lecturer, and by remembering, with both solemnity and the victorious joy found in Jesus Christ, the repose of Protopresbyter Alexander Schmemann (December 13, 1983) and his newly departed wife, Matushka Juliana (January 29, 2017). He particularly noted that Fr. Alexander and Mat. Juliana would have marked their 74th wedding anniversary on the day of this year’s lecture