Home/Seminaries/March for Life 2017
Previous Next 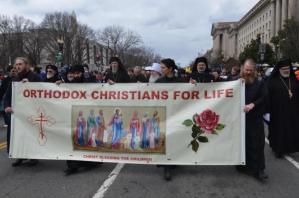 Orthodox Christians at the national March for Life 2017In a show of solidarity to protect the rights of the unborn, students, administrators, and alumni from St. Vladimir’s Seminary joined in the 44th annual March for Life in the nation’s capital. The theme of this year’s March, “The Power of One,” drew hundreds of thousands of supporters and spawned sister events across the nation.

His Beatitude Metropolitan Tikhon, primate of the Orthodox Church in America (OCA), and Chairman of the Board of the Seminary, along with seminary President Archpriest Chad Hatfield, had opportunities to speak on Eternal Word Television Network (EWTN) during the rally. View EWTN’s coverage of the March for Life on its Facebook page.

In his remarks His Beatitude noted, “The Orthodox Church is a prayerful Church. Our 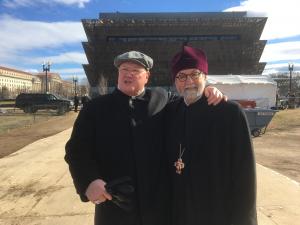 Cardinal Timothy Dolan with Archpriest Chad HatfieldLord, Jesus Christ calls us to purify ourselves and strive for holiness. This, however, challenges us to speak out, proclaiming that life is indeed a gift from God. Life is not just biological existence, but a manifestation of the life of God himself.”

The rally began with newly elected Vice President Pence speaking at the Washington Monument. From there the crowd moved past the Capitol to the Supreme Court to merge with another large group already gathered. Among the Orthodox Christian seminaries represented, including St. Vladimir’s, were Christ the Saviour Seminary, Johnstown, PA; Holy Trinity Orthodox Seminary, Jordanville, NY; and St. Tikhon’s Orthodox Theological Seminary in South Canaan, PA. 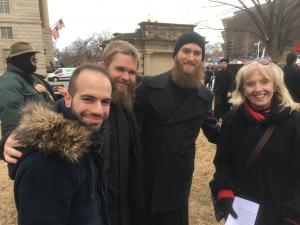