Home/Seminaries/HCHC Student&#039;s Love for Literature Takes Him Far
Previous Next

When Anthony Linderman first came to the HCHC campus, he wasn’t thinking about transferring here from Wheaton College in Illinois. He had spent two rewarding years as an undergraduate there and was simply visiting an old family friend in Massachusetts during a semester off. However, everything changed during that visit, because the friend was Rev. Fr. Luke Veronis, who serves as Director of the Missions Institute of Orthodox Christianity, which is based at HCHC, and teaches at both Hellenic College and Holy Cross. 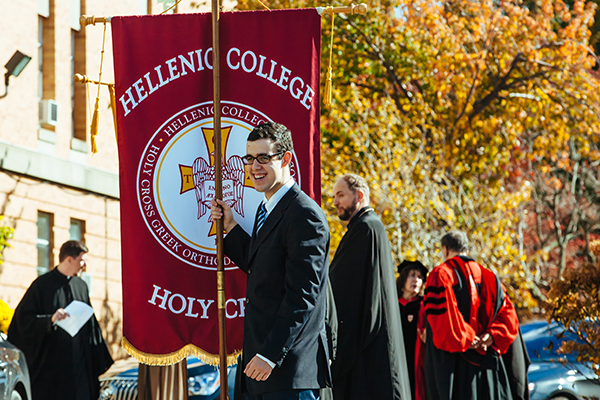 Fr. Luke arranged for Anthony to sit in on some classes. “It was a huge surprise—a very pleasant one,” recalls Anthony. “Here was this community of young, English-speaking Orthodox people in small classes where everyone’s voice could be heard. I sat in Dr. Lanzano’s class on modern British writers and there were only three students—all now dear friends of mine—with really interesting things to say. That kind of intimate learning experience just doesn’t happen at other places, or at least not on the undergraduate level. I was thrilled!” Of course, so was Fr. Luke, who had known Anthony’s parents in Albania, where they spent twelve years as missionaries, and watched Anthony and his four siblings grow up there.

Since transferring to Hellenic College two years ago, Anthony has pursued his keen interest in literature and writing not only as a Literature and History major but as the founder of the Inklings, a creative-writing group that includes both undergraduates and grad students. “Creative writing has always been a passion of mine,” he says. The group takes its name from the original Inklings, made up of writers like C.S. Lewis and J.R.R. Tolkien with ties to Oxford University, where Anthony spent a month while at Wheaton. He has also studied Russian literature and creative writing at Boston College and Newbury College, respectively, taking advantage of the opportunity for Hellenic College students to cross-register at those schools. And his enthusiasm for HCHC has rubbed off on his sister Melania, who is now enrolled at Hellenic College for a Semester of Faith.