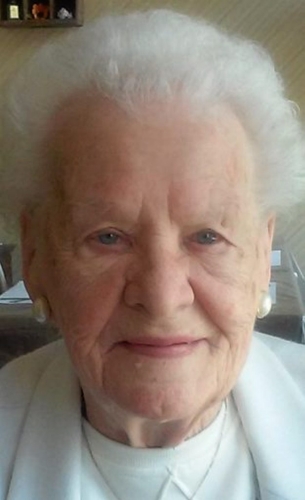 JOHNSTOWN, PA –  The Diocesan Chancery has been informed that Pani Martha Zeleniak, the widow of  Very Rev. Protopresbyter John Zeleniak,  reposed in the Lord on Sunday, December 25, 2016.

Pani Martha was born Dec. 10, 1923, to the late John and Martha Bodrucki in Elizabeth, N.J.  She was married for 57 years to the late Protopresbyter John Zeleniak, who died in 1999. Together they served parishes in Ambridge and Nesquehoning, before accepting the pastorship at St. George’s Orthodox Church in Taylor in 1952. They served Taylor and the greater Scranton community for over 40 years.She was a beloved and respected member of the St. George’s Orthodox Church community. Throughout her 74 years of service, she was recognized as the longest-serving pani (priest’s wife) in the American Carpatho Russian Orthodox Diocese.

Pani Martha was known for her love of people and her talents in the kitchen, which she combined to spread love for others. Her cooking and baking skills won recognition both locally and nationally. She appeared many times in various Times-Tribune recipe features. She was most famous for her banana cakes, which she considered her “credit card” of love and thanks to her many friends and helpers. Over the years, many hundreds were freely given to charities and friends throughout Northeast Pennsylvania.

Pani Martha remained active late in life. She was a regular participant in the Taylor Senior Citizens group. She was an avid reader, reading more than 50 books a year for many years. She enjoyed doing the daily crossword puzzles after reading the newspaper, calling and visiting her many friends, especially those who were homebound or ailing and using her computers to surf the internet for information, play games and keep in touch with her friends near and far. Pani Martha loved simple wisdom and sayings. Among her favorites was “one day at a time,” which she spoke many times a day. She was a kind, gentle and generous friend to all and made it a point to do something nice for someone every day. She will be missed by many.

Memorial contributions in Pani Martha’s memory may be made to St. George’s Orthodox Church.