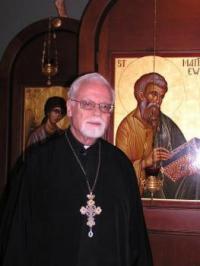 In April 2016, Father Paul, who was retired, had received the high honor of the Gold Order of St. Raphael for his more than four decades of priestly ministry in a variety of capacities, which included being the founding pastor of St. Matthew Antiochian Orthodox Church in Torrance, CA; dean of the Southern California Deanery; and Protosyngellos (episcopal vicar) in the AOCANA.

His Eminence Joseph, archbishop of New York and metropolitan of all North America (AOCANA), announced Fr. Paul’s repose on the archdiocesan website. His Eminence stated: “It is with a sorrowful heart, lightened only by confidence in the abundant mercy of our Lord Jesus Christ, that I announce the passing of the Right Reverend Protosyngellos Paul Doyle. For almost 42 years, Fr. Paul has led an exemplary life as a priest of the Holy Orthodox Church, and, I dare say, is one of the most profoundly humble men I have ever met. Read Metropolitan Joseph’s entire text.

Read the schedule of funeral services.