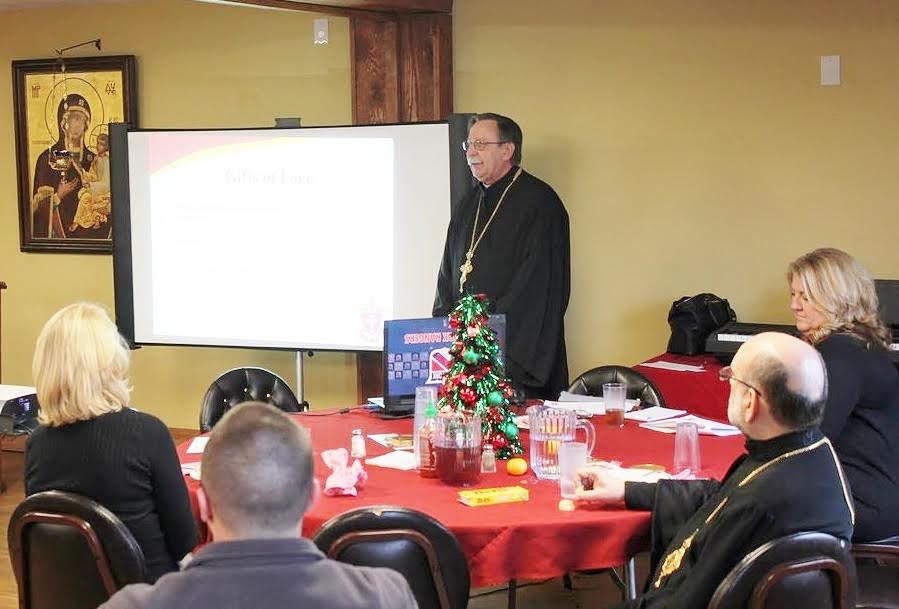 Fr. Theodore Boback explains the FOCA’s ministry to members of the STOTS community.

Three members of the national Executive Board of the Fellowship of Orthodox Christians in America visited Saint Tikhon’s Seminary here on December 6, 2016 to update faculty members and students on the organization’s mission, its current work and its future plans.

Archpriest Theodore Boback, FOCA Spiritual Director, joined Marge Kovach and Allison Steffaro, FOCA President and Vice-President respectively, for the presentation.  They were warmly welcomed by His Eminence, Archbishop Michael, STOTS Rector, who thanked the FOCA for fulfilling its $300,000.00 pledge to the seminary’s Married Student Housing Project.

In October 2015, the seminary’s FOCA Chapter 121 was reactivated and has actively engaged the wider community, most recently by hosting a fundraising dinner at Saint Michael Church, Jermyn, PA.

“Since those who have been serving as the local FOCA chapter’s leadership this past year will be graduating in May 2017, the board members’ visit was timed well to pique the interest of newer students,” said Archpriest Steven Voytovich, SVOTS Dean.

Established in 1927 as the Federated Russian Orthodox Clubs [FROC], the FOCA is an official organization of the Orthodox Church in America, and Orthodox Christians of all jurisdictions are welcome to become part of the Fellowship’s work and service. Its mission is to proclaim, share and reveal our Orthodox Christian Faith through service, fellowship and example.