How to Prepare for Finals? | Happiness and Joy

Home/Ministries/How to Prepare for Finals? | Happiness and Joy
Previous Next

How to Prepare for Finals? | Happiness and Joy 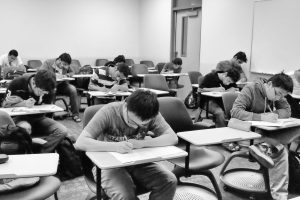 Well, it’s certainly that time of year! If you aren’t already embroiled in your first finals of the 2016-2017 academic year, then they’re right around the corner.

Finals can be (read: are) a stressful time for students, and that stress manifests itself in different ways for different people. For Orthodox Christians particularly, our academic life can start to eat into our spiritual life. Long nights bent over the books can supersede evening prayers and preclude the morning ones as well; the urgency and time-consumption of impeding tests and due dates can supplant services over the weekend.

That’s okay, that’s a reality: the world has to be balanced, and all balancing requires sacrifice. Now, most people around you will advocate the sacrifice of the spiritual for the sake of studies–as they rightly should. They’re not Orthodox Christians (probably), so they don’t share your perspective, and if they are students, they understand the stress of finals. They will encourage you to empty yourself into your academic life. My goal, here, is to politely disagree.

Human beings were made for the glorification of God, and as such, there is no life outside of God. C.S. Lewis writes in Mere Christianity:

God made us: invented us as a man invents an engine. A car is made to run on gasoline, and it would not run properly on anything else. Now God designed the human machine to run on Himself. He Himself is the fuel our spirits were designed to burn, or the food our spirits were designed to feed on. There is no other. That is why it is just no good asking God to make us happy in our own way without bothering about religion. God cannot give us a happiness and peace apart from Himself, because it is not there. There is no such thing.

This, frankly, is pretty nuts. I mean, it’s something we all believe and accept, but if you apply it to your everyday life, it throws quite the wrench in things.

What do you do, when you’re sad and want to be happy? I watch Netflix, and if that doesn’t work, I keep watching Netflix anyway. I might talk to one of my close friends or loved ones. I’ll also get on Twitter and argue with someone about the Philadelphia Eagles.

What do you do, when you think about your long-term happiness? I think about my grades, definitely–they are the benchmark of success in my main occupation of life: college. I think about my friends and family, when I’ll get to see them next, how they’ll be with me throughout the years of my life. I think my job, at school and at camp, and the impact I’m making in my work.

What do you do, when you think about your even longer-term happiness? I think about the family I want to raise and the job I want to have. I think about how I’m going to impact the world and how awesome it will be. I also think about raising my family in the church.

Just there, for me, was the first time God got involved in the happiness quest. Not in the short-term, of today’s emotions; not in the long-term, of my yearly plans; but in the longer-term, of my five-year plan.

Fr. Paul Lazor always told me that happiness had the same root word as happenstance–and as such, it was just as coincidental. Happiness happens to you, it’s a feeling, and feelings are fleeting. They come and go with the wind, and are defined by many factors outside of our control.

Joy, on the other hand, is something far greater. It is a state of being that is rigid, that weathers the storm of circumstances and the fallen world. It is something we can only achieve in our relationship with God.

I make this distinction to say that, perhaps, like me, you might be happy if you did well on your finals–but, if the Divine Liturgy and daily prayers were sacrificed in this effort, you would feel no joy. That happiness would eventually dissipate–at the very least, by next semester, when the cycle repeats. Maybe you could sustain that happiness over your entire college career, graduate with that killer GPA, which will help you get that incredible job you’ve always wanted–maybe you can keep feeding the happiness, helping it endure. But eventually, the world might catch up with you, and the happiness will evaporate. And, if you’ve followed this successful path without God, you will be left without joy.

My encouragement to both you and to myself, my friend, is quite simple: do not forget God this finals season, this Christmas season, as the weight of the world and its temporal happiness would have you do. Do not sacrifice the rush of happiness for the enduring warmth of joy in the Lord.

P.S.: This is all quite well and good, but without concrete ideas on how to accomplish this, we may find ourselves stranded on a sea of ideals, without the paddle of actual practices. As such, here are a few things we can do to help achieve this remembrance of the Lord.