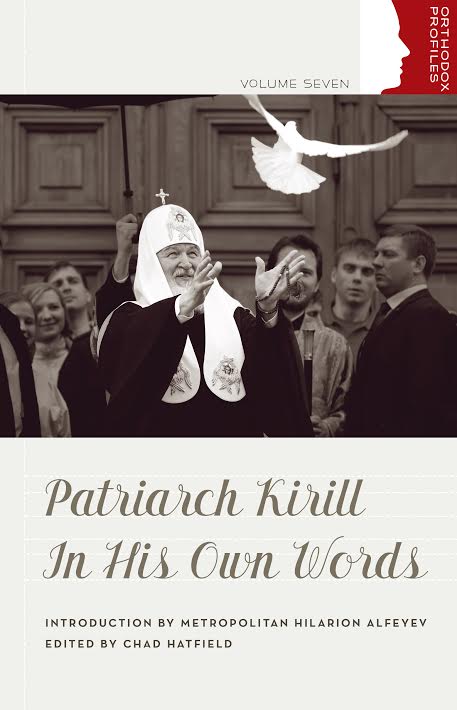 As part of this weekend’s Jubilee Celebration marking the 70th birthday of His Holiness, Patriarch Kirill of Moscow, Saint Vladimir’s Seminary Press [SVS Press] released a collection of his writings, titled Patriarch Kirill in His Own Words, on Friday, November 18, 2016.  The new volume is laid out in an engaging “daily reading” format, and includes short excerpts from Patriarch Kirill’s homilies, media interviews, articles, and formal speeches, among other published talks and writings.

The book is Volume Seven of the Press’s Profile Series, edited by Archpriest Chad Hatfield, CEO of Saint Vladimir’s Orthodox Theological Seminary, who will be present in Russia for the celebration. [See related story regarding participation by His Beatitude, Metropolitan Tikhon and a delegation from the Orthodox Church in America.]  SVS Press’s English-language edition of the work was released simultaneously with a Russian-language version published by Saints Cyril and Methodius Theological Institute for Post-Graduate Studies, as a joint publication venture.

The introduction to the book, written by His Eminence, Metropolitan Hilarion of Volokolamsk and Chairman of the Moscow Patriarchate’s Department for External Church Relations, states in part, “This book allows the living voice of Patriarch Kirill to be heard in English for all American readers who want to listen… the Patriarch [conveys] the eternal gospel truths, the divine truth that remains unchanged, regardless of the external circumstances of the world.”

Within the body of his new work, Patriarch Kirill explains his vision for the Orthodox Church’s mission and public life, including an explication of the relationship between Church and state, and his thoughts on the relationship between the Russian Orthodox Church and the Orthodox Church in America.  He also offers counsel on internal spiritual warfare—that is, how to battle sinful passions and acquire Christian virtues amidst the temptations and distractions of 21st century life.

“I know this book will be an inspiring surprise to North American readers, as Patriarch Kirill’s words were to me, when I first encountered them,” said Father Chad.  “It’s my joy to share his vision with the English-speaking world.”

Patriarch Kirill in His Own Words may be ordered on-line from SVS Press.