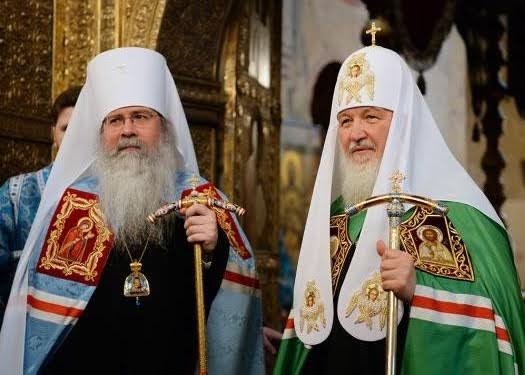 At the invitation of His Holiness, Patriarch Kirill of Moscow, His Beatitude, Metropolitan Tikhon and a delegation from the Orthodox Church in America will join the Primates and representatives of the Local Orthodox Churches at services and related festivities in Moscow marking His Holiness’ 70th birthday.

Metropolitan Tikhon and the OCA delegation will arrive in Moscow on Friday, November 18, 2016.  Members of the delegation include His Grace, Bishop Daniel of Santa Rosa; Archimandrite Gerasim; Archpriest Nazari Polataiko; Archdeacon Joseph Matusiak and Roman Ostash.

On the day of their arrival, Metropolitan Tikhon and the OCA delegation will meet with Patriarch Kirill at his residence in Moscow’s Danilov Monastery.  Later they will celebrate a Service of Intercession before the relics of Saint Tikhon the Confessor in the Donskoy Monastery.

On Saturday, November 19, Metropolitan Tikhon will preside at the celebration of the Divine Liturgy at the OCA’s Representation Church of the Great Martyr Catherine, after which a 40-day Memorial will be celebrated for the repose of Archimandrite Alexander [Pihach], the recently departed Dean of Saint Catherline’s and OCA Representative to the Moscow Patriarchate.  Among those expected to attend the Divine Liturgy is Canadian Ambassador to the Russian Federation, John Kur.  On Saturday evening, Metropolitan Tikhon and the OCA delegation will join the permanent members of the Holy Synod of the Russian Orthodox Church and the Primates of the Local Orthodox Churches and their delegations for a welcoming dinner.

Moscow’s historic Christ the Savior Cathedral will be the site of the Patriarchal Divine Liturgy on Sunday, November 20, after which a reception honoring Patriarch Kirill will be held in the cathedral refectory.  The following day, a formal program marking the Patriarch’s birthday will be held in the cathedral hall, where a concert in Patriarch Kirill’s honor will be held on Tuesday, November 22.  Earlier that day, Metropolitan Tikhon will meet with US Ambassador to the Russian Federation John Teft at the US Embassy.

Metropolitan Tikhon and the delegation will return to the US on Wednesday, November 23.

Patriarch Kirill was born on November 20, 1946, in Leningrad—today’s Saint Petersburg—where his father served as a priest.  He graduated from the Leningrad Theological Seminary and Academy in 1970.  In April 1969, he embraced monasticism and was ordained to the diaconate.  In June of that same year, he was ordained to the priesthood.  In March 1976, he was consecrated Bishop of Vyborg and Auxiliary of the Leningrad Diocese, while in 1984 he was elected Bishop of Smolensk.  In 1991 he was elevated to the rank of Metropolitan.

Patriarch Kirill has held numerous administrative positions within the Russian Orthodox Church.  He served as Rector of the Leningrad Theological Seminary and Academy from 1974 to 1984.  For many years he has been a leading figure in the Church’s ecumenical activity.  In 1989, he was appointed Chairman of the Department for External Church Relations and became a permanent member of the Russian Church’s Holy Synod.  On December 6, 2008, after the repose of His Holiness, Patriarch Aleksy II, Metropolitan Kirill was named Patriarchal Locum Tenens.  He was elected Patriarch of Moscow by the Local Council of the Russian Orthodox Church on January 27, 2009, and enthroned on February 1.