Come and See that Jesus Is the Messiah

Come and See that Jesus Is the Messiah

Last week we talked about the invitation of Jesus to “come and see” where He lived, and we established that to become a disciple is first to be near to the Lord and experience Him in His own home.

This week, we take a look at what happens right after this first “come and see” calling. Immediately after spending the evening with Jesus, a Galilean game of telephone begins as Andrew goes to find Peter, and after being called by Jesus, Philip goes to find Nathanael. Andrew declares, “We have found the Messiah,” and Philip says, “We have found Him of whom Moses in the law, and also the prophets, wrote–Jesus of Nazareth, the son of Joseph.” Pretty hefty claims.

It’s perhaps not too much of a surprise that the testimony of Philip, no matter how enthusiastic, was not enough to convince Nathanael. He’s not only not convinced that Jesus is the Messiah, but he’s not convinced it is possible for someone that important to come from such a scripturally unimportant (and sometimes disreputable) town like Nazareth.

Amazingly, Philip is not taken aback by Nathanael’s doubts nor does he try to further convince him. He simply tells him, “Come and see.” He is neither offended that Nathanael may not believe him nor is he shaken in his own decision to follow Jesus. It’s as if he says, “You don’t have to believe me. I’m convinced. Come see for yourself and decide.”

As an aside, there’s an important lesson here about evangelism. First, it’s important to notice that “come and see” only follows Philip’s willingness to seek out his friend and boldly declare to him that he has found the Savior. But once he’s given the testimony of his own encounter with the Lord, Philip allows Nathanael the freedom to come and see for himself–or not.

Philip invites Nathanael to get to know Jesus, and Nathanael comes. Though he has heard the testimony of his friend, like Thomas after the resurrection, Nathanael needs to meet Jesus himself. 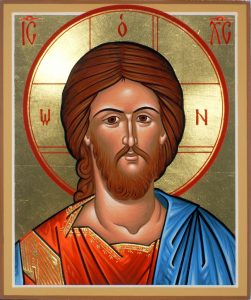 Icon by the hand of Dn. Matthew Garrett. Used with permission.

To meet Jesus and discover experientially that He is the Messiah, the Savior, is essential to becoming a disciple of Christ. No one is made a believer on the testimony of others alone. You have to meet Jesus yourself by coming to Him. And while we may not be able to walk down the road from our shady fig tree to find Him, we can meet Jesus in prayer. Even a tentative or doubt-filled prayer is a vehicle for encountering the Lord. Nathanael probably wasn’t walking down the road actually expecting to meet the Messiah; in fact, he probably thought the end result of his excursion with Philip would end in disappointment, in nothing. But he made the walk anyway just to see. He carried his doubts right to the feet of the Lord.

And when Nathanael got near to Jesus, while he was still a bit down the road, Jesus calls out to him, praising him for his righteous doubt and for his willingness to meet Him anyway. He tells Nathanael that He already knows about his doubts because He saw him when he was under the fig tree.

So come. Don’t be afraid to carry your doubts and your questions with you, but come. If with authenticity and honesty you approach Jesus, He will honor you from far off, coming to you and offering you His salvation so that you of your own accord, with Nathanael, can declare, “You are the Son of God.”