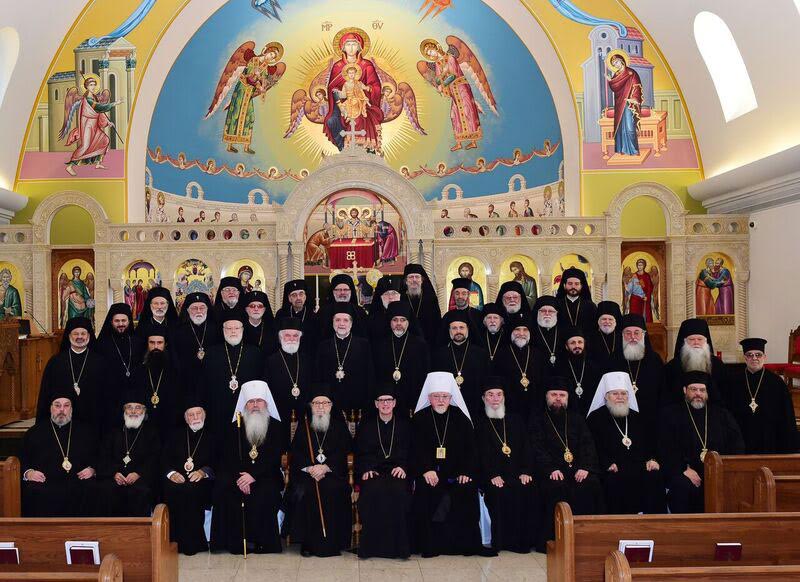 The seventh annual meeting of the Assembly of Canonical Orthodox Bishops of the United States of America opened on Tuesday, October 4, 2016 with the celebration of the Divine Liturgy at the Antiochian Orthodox Basilica of Saint Mary, Livonia, MI.

His Beatitude, Metropolitan Tikhon and members of the Holy Synod of Bishops of the Orthodox Church in America are among the 41 hierarchs in attendance at the meeting, which continues through Thursday, October 6.  See related article.

The bishops commenced their work with an opening address by the Assembly Chairman, His Eminence, Archbishop Demetrios of the Greek Orthodox Archdiocese of America, who greeted and welcomed the hierarchs.  “When we speak together as an Assembly of Bishops, we do so with the authority of the Church,” he said.  “We do not speak as jurisdictions or merely as representatives, but as a single body of Orthodox hierarchs who are committed to sharing the transformative light of Christ with our local society.”

His Eminence began his remarks with an expression of gratitude and with reflections on the Holy and Great Council which met in June of this year in Crete, crowning 55 years of preparation.  He noted that 12 of the Assembly’s bishops participated in the “productive conciliar work and discussions of the Council, which helped us gain a better perception of who we are and… of the need to consistently strive for unity.”

Emphasizing the importance of our local Assembly, Archbishop Demetrios stated, “we must search for ways to align our local diocesan work with the work of the Assembly, and it is obvious that our committees may assist us.”

At Tuesday’s first working session, the bishops approved the minutes of their 2015 meeting, the agenda of their present work, and the financial report of the Treasurer.  The bishops also heard the reports of the work of the Assembly Secretariat and committees.  A substantial amount of time was dedicated to hearing and discussing reports from five of the Assembly Agencies.

Father Steven Powley, Executive Director of Orthodox Christian Prison Ministry [OCPM], presented a new promotional video that describes its work through thousands of personal letters written to prisoners and the distribution of Bibles and books, icons, pamphlets and spiritual works.

Dean Triantafilou, Executive Director of the International Orthodox Christian Charities [IOCC] — the humanitarian arm of the Assembly of Bishops — shared details on IOCC’s work since its inception.  IOCC has delivered nearly $600 million of assistance worldwide in some 50 countries during its 25-year existence.  In 2015, IOCC provided program services of $55 million.  This year to date, IOCC has provided program services of $21 million as it looks forward to celebrating its 25th Anniversary.

Father Martin Ritsi, Executive Director of the Orthodox Christian Mission Center[OCMC], reported on the ministry which focuses on evangelization and re-evangelization of people.  In 2015, twenty-nine people served as OCMC missionaries in six countries, where they engaged in catechism and seminary teaching, youth work, primary and secondary education, counseling, translations and various outreach ministries.  Father Martin also described the “Support a Mission Priest” program, which continues to subsidize the support of almost 400 clergymen in 16 countries.  OCMC currently contributes to theological training and mission projects in over 30 countries.

Highlighting the effective, world-wide media witness of the Orthodox Christian Network [OCN] were Father Gregory Joyce, OCN Board member; Charles Lelon, Vice Chairman; and Ms. Eleni Alexiou, Managing Director, who reported on OCN’s new suite of Orthodox mobile apps which, along with other multimedia resources now reaches as many as 5.7 million people per week.

James Giannakis of the Orthodox Christian Fellowship [OCF] presented ways OCF strives to be the loving presence of Christ and the Orthodox Church on college campuses.  OCF is an integral part of students’ spiritual formation and challenges them to explore and live their faith on a daily basis.  OCF currently has more than 320 campus chapters throughout the country.

The first day’s work concluded with a meaningful discussion and some clarification on the Assembly’s mandate following the Council in Crete.  Following this discussion, the hierarchs recommitted to their common work as members of the Assembly of Bishops.

Additional information is available on the Assembly web site.