Presentations from Orthodox Education Day, our Seminary’s annual open house, this year held October 1, 2016, are being made available on the website of Ancient Faith Ministries. All presentations center on the day’s theme, “Celebrating Mary,” and included among them is the Fourth Annual Father John Meyendorff Lecture, given by Dr. Mary B. Cunningham. 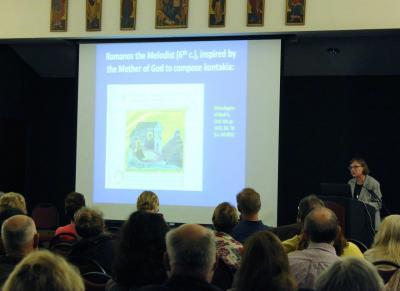 Dr. Cunningham delivered her lecture, entitled, “The Mystery of Mary: The Mother of God in Orthodox Christian Tradition,” to a capacity crowd in the Seminary’s Metropolitan Philip Auditorium. She spoke with both scholarly precision and devoted warmth about the person of the Virgin Mary, while endeavoring to reconcile for listeners the narrative and typological strands within Orthodox Christian tradition that create a tension: on the one hand, they describe a humble teenager of third-century B.C. Galilee, and on the other hand, they highly elevate a woman to queen-like dignity through magnificent liturgical epitaphs.

Dr. Cunningham resolved the seeming tension by explaining the Virgin Mother’s place in salvation history, in which her personal story (with noticeable historical “gaps”) is subsumed within Christological events. Quoting St. Andrew of Crete’s Homily on the Dormition, Dr. Cunningham summed up: “She is the great world in miniature, the world containing him who brought the world from nothingness into being, that it might be a messenger of his own greatness.”

Other recorded presentations included: “Imagining the Akathistos Hymn in Late Byzantine Art,” by Nicole Paxton Sullo, Ph.D. Candidate, History of Art Department, Yale University; and “The Hope of the Hopeless: The HOPE Project,” a talk given by the Sisters of All Saints Greek Orthodox Monastery, Long Island, NY, about providing resources and healing for victims of human trafficking. 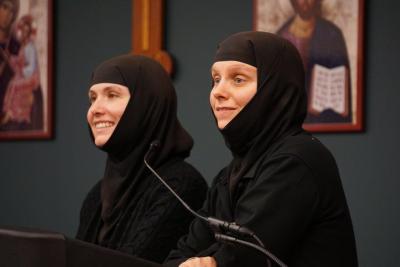 “We are especially gratified,” said seminary CEO Archpriest Chad Hatfield, “that our friends and alumni came out to Ed Day this year, not only to hear the excellent talks by our superb speakers but also to support us during a trying time.

“Because we wanted to recognize and pay due respect to our neighbors during a local tragedy—the line-of-duty death of a brave firefighter—we had decided to completely reorganize our day’s schedule at the last moment,” he explained. “Yet our supporters still came out, thus honoring our intent toward our neighbors while making our event truly successful; it was a wonderful gathering of God’s people.

“And,” he concluded, “We wanted to ‘pay forward’ their kindness, so we decided spontaneously to tithe whatever net profit we receive from this year’s Ed Day to The HOPE Project, run by the Sisters at All Saints Monastery in Long Island. Truly, we who gathered on Ed Day felt like one family under the Virgin’s protection.”

View of gallery of photos by Mary Honoré, Adrienne Soper, and Alexandru Popovici