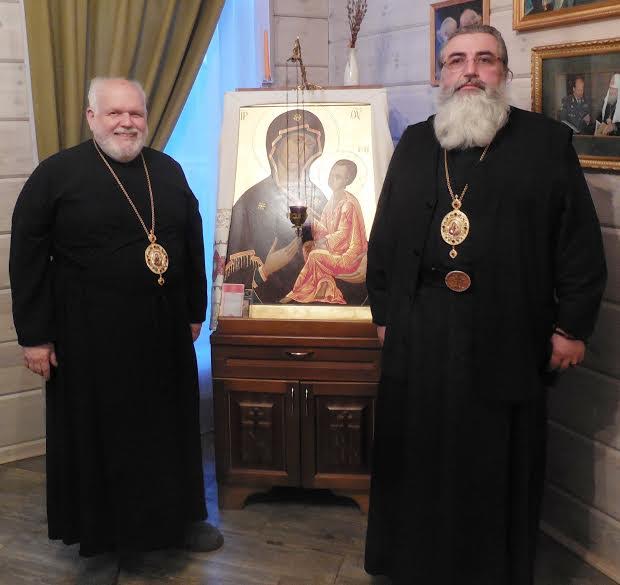 Bishop Paul and Bishop Mstislav with reproduction of the Tikhvin Icon, July 2016.

His Grace, Bishop Mstislav of Tikhvin, Russia will join His Beatitude, Metropolitan Tikhon and His Grace, Bishop Paul of Chicago at Holy Trinity Cathedral here for the celebration of the Feast of Saint John [Kochurov] of Chicago October 29-30, 2016.

The Feast of Saint John, who served as rector and builder of the historic cathedral before returning to Russia, where he was the first cleric to be martyred at the outset of the Russian Revolution, is commemorated on October 31—the day of his death.

During the celebration, Bishop Mstislav will present a reproduction of the Wonderworking Tikhvin Icon of the Mother of God to the cathedral.  As is widely known, the original icon was ascribed to the hand of the Evangelist Luke and was enshrined in Jerusalem and later Constantinople before it appeared in northern Russia in the late 14th century.  Enshrined in Tikhvin’s Dormition Monastery, where it remained until its closure and subsequent destruction by the Soviet authorities in the 1920s, the icon was taken to Latvia in the face of Nazi advances during World War II.  In 1949, His Grace, Bishop John [Garklavs] of Riga—later Archbishop of Chicago—brought the icon with him to the US, where for many years it was enshrined in Chicago’s Holy Trinity Cathedral.  After Archbishop John’s death in 1982, his adopted son, Archpriest Sergei Garklavs, was the icon’s guardian until it was returned to the Tikhvin Monastery in 2004.  See related story.

According to Archpriest John Adamcio, cathedral Dean, Bishop Mstislav will arrive at Holy Trinity Cathedral at 2:00 p.m. on Saturday, October 29, after which an Akathistos Hymn in honor of the Tikhvin Icon will be celebrated.  The Vigil will be celebrated at 4:30 p.m.

On Sunday, October 30, Metropolitan Tikhon and Bishops Paul and Mstislav will concelebrate the Divine Liturgy at 9:30 a.m. at the cathedral.  A banquet will follow at Pizano’s, 2056 West Division Street, Chicago at 1:00 p.m.  Donation for the banquet will be $55.00 per person or $100.00 per couple, with a special children’s menu and pricing.

Additional information and details will be posted on the Diocese of the Midwest web site as it becomes available and will be sent to all parishes, OCA and non-OCA alike, in the immediate future.

In related news, a newly commissioned icon of the “Synaxis of Saints of Holy Trinity Cathedral” will be blessed and enshrined in the cathedral during the weekend.  The icon features six North American saints associated with the cathedral and an iconographic rendering of the late Metropolitan Leonty, who served as Bishop and later Archbishop of Chicago from 1933 until his election as Metropolitan in 1950.