Meeting between the OCA and traditionalist Anglicans held

Meeting between the OCA and traditionalist Anglicans held 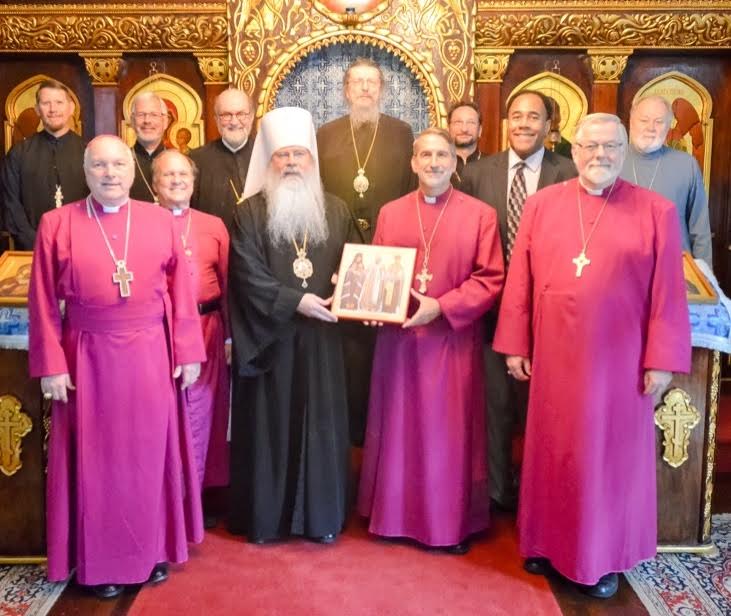 With the blessing of His Beatitude, Metropolitan Tikhon, a meeting between the Orthodox Church in America [OCA] and the Anglican Church in North America [ACNA] was held at Immaculate Conception Seminary here on Wednesday and Thursday, August 17-18, 2016.

Shortly after its establishment in 2009 by traditionalist former members of the Episcopal Church in the USA and the Anglican Church of Canada,  the ACNA entered into informal conversations with the OCA.

His Eminence, Archbishop Melchisedek of Pittsburgh and Western Pennsylvania delivered the main dialogue paper, titled “The Universe of Christian Discourse,” which set out to reestablish a common methodology and vocabulary for fruitful and reconciliatory discussions.  Priest John Parker, Chair of the OCA’s Department of Evangelization, delivered a talk on the holy priesthood from the Orthodox Christian perspective.  ACNA Bishop Keith Ackerman delivered a similar talk from the Anglican perspective.

Also present at the meeting was Protopresbyter Leonid Kishkovsky, OCA Director of External Affairs, who offered a perspective on the June 2016 Orthodox Council held in Crete.  “Such conversations and explorations are valuable because we are discovering significant theological affinities as well as identifying some significant theological differences,” Father Leonid said.

On Thursday, August 18, Metropolitan Tikhon welcomed Archbishop Foley Beach, ACNA Primate, and members of his delegation at the OCA Chancery.  While they had been introduced informally at the 18th All-American Council in Atlanta, GA in 2015, the occasion marked their first formal meeting.  OCA and ACNA representatives presented Metropolitan Tikhon and Archbishop Beach with icons of Saints Tikhon of Moscow, John Kochurov and Sebastian Dabovich, which were blessed in the Chancery’s Saint Sergius of Radonezh Chapel.  The three saints had participated in a significant Anglican/Orthodox gathering in Fond du Lac, WI in the early 1900s.

“A luncheon was served with warm and fraternal conversation, both personal and ecclesiastical, including mutual introductions and the exchange of perspectives on common pastoral challenges in 21st century America,” said Father John Parker.  “Father Leonid and Archpriests John Jillions, OCA Chancellor, and Eric Tosi, OCA Secretary, also were present for the luncheon, together with Canon Andrew Gross, Assistant to Bishop Foley.

A gallery of photos from the meeting also is available on the OCA website and Facebook page.