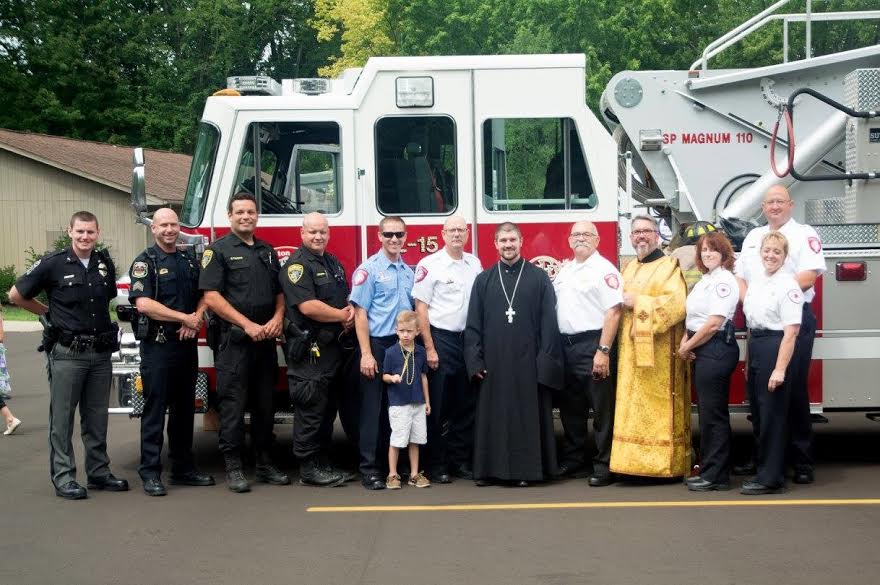 Priest Gabriel Bilas and the faithful of Saint Mary Magdalene parish, Fenton, MI, welcomed members of the police and fire departments and local EMTs at the blessing of vehicles in honor of the Holy Prophet Elijah on Sunday, July 17, 2016. 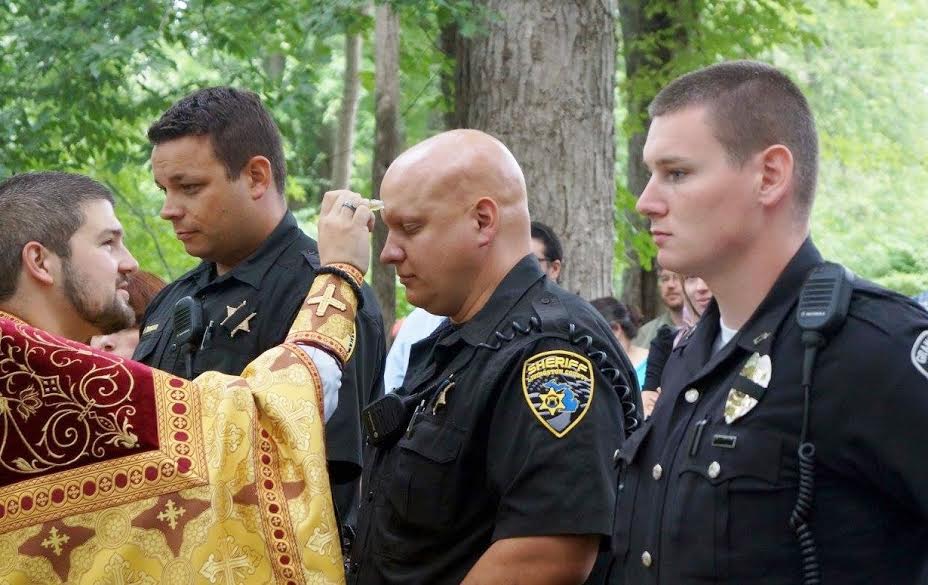 “There was representation from all of our surrounding cities, including Fenton, Livingston County, and Grand Blanc Township,” said Father Gabriel, who offered prayers for the first responders and who, using a list dating back to the 1870s, led everyone in singing “Memory Eternal” for those who had departed this life in the line of duty.  “The first responders who were present were anointed with oil as prayers were offered for their safety and protection.  With the series of police shooting happening in our country this past month, the first responders offered their thanks and gratitude for our prayers and support. 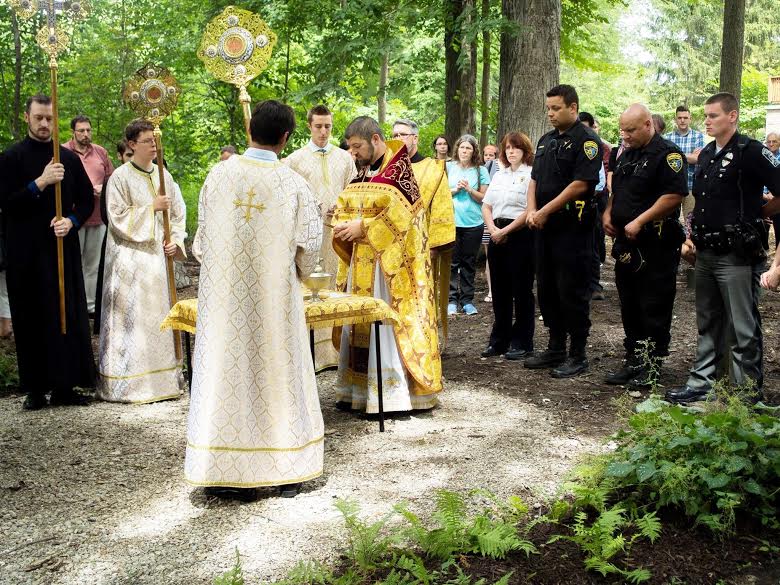 Prayers were offered on behalf of the area’s police and firefighters.

“Prophet Elijah was in a similar situation to that which we face today, living in a godless society—one that had lost its way,” said Father Gabriel in his homily at the Divine Liturgy.  “Yet his humble faith allowed God to guide him and bring light to the darkness of his time….  In honoring his memory, we are doing our part in bringing God back into the forefront of our community, asking God to bless and strengthen those men and woman who God uses to protect us.” 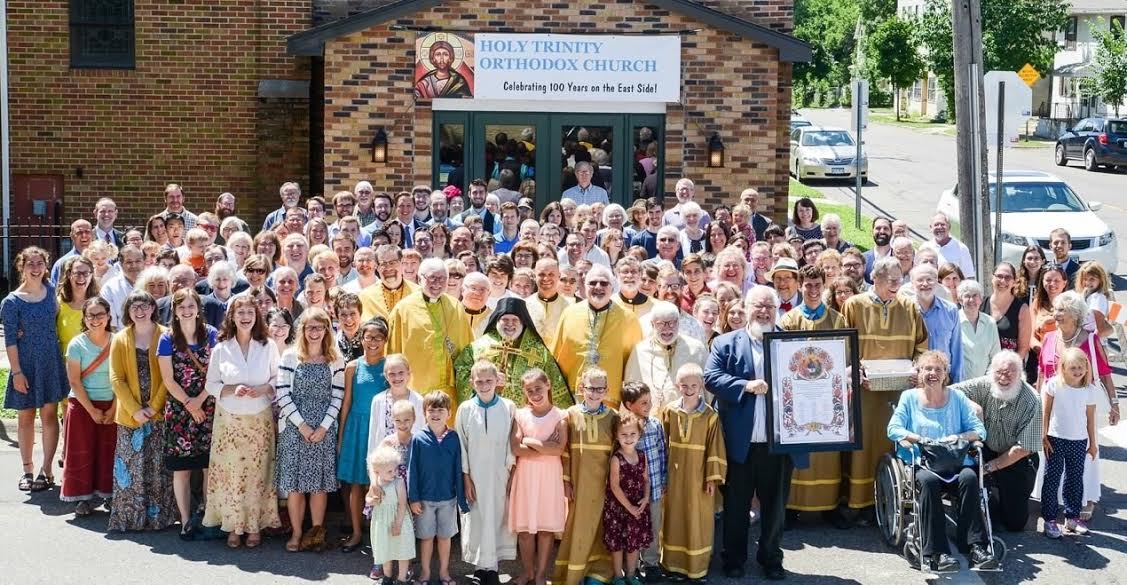 Bishop Paul with clergy and faithful of Holy Trinity Church.

Holy Trinity parish, Saint Paul, MN, celebrated its 100th anniversary the weekend of July 16 -17, 2016.  The weekend opened with an unexpected blessing as before Vespers on Saturday, parishioner Mike Lotti presented the parish with a beautiful icon of the Mother of God from the Iviron Monastery on Mount Athos.  In June, Mike and four pilgrims from Saint Mary’s Cathedral, Minneapolis, MN, had traveled to Mount Athos, where they selected the icon as a gift to Holy Trinity Church in honor of its centennial.

His Grace, Bishop Paul of Chicago joined Archpriest Jonathan Proctor, Holy Trinity’s Pastor for the past 26 years, and the parish’s faithful in prayerful remembrance of those hearty founders who planted the community in 1916 and those departed members who sustained it in subsequent years.  Among the many in attendance were descendants of the parish’s early founders. 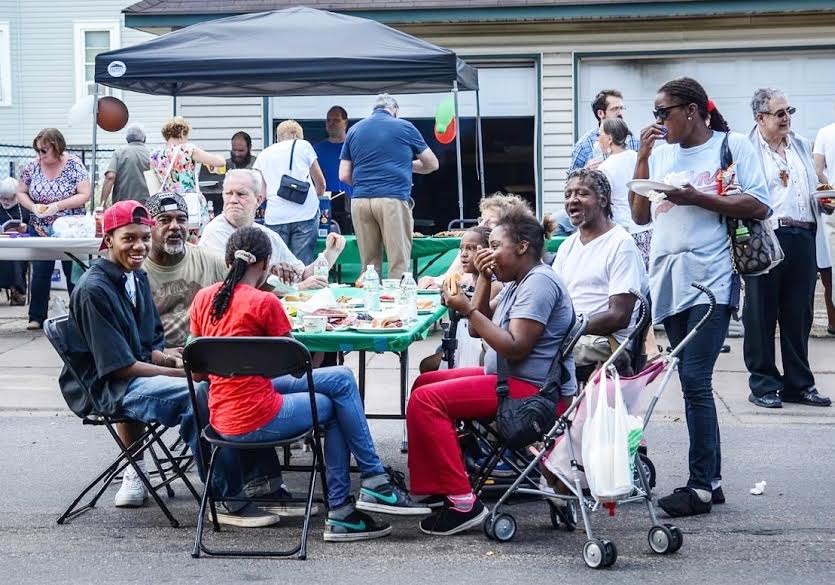 “After Saturday evening Vespers, everyone was invited to a block party on the corner of Case and Forest Streets,” said Father Jonathan.  “Volunteers had distributed invitations throughout the community to include neighbors in our celebration.  Picnic food was bountiful, thanks to the generous donations from local businesses.  The evening entertainment provided a wide range of talented performers, including the Karen Cultural Association Dancers of Minnesota.  Children’s activities included pony rides, a bouncy house, face painting and a spectacular visit by members of the Saint Paul Fire Department, who opened their truck to the curious and displayed an ever-expanding ladder.

“The theme of the centennial was ‘Looking Back, Living Now,’” Father Jonathan continued.  “In this context, a colorful booklet documenting the parish’s history was distributed as a memento of the celebration.  A continuous slide presentation and an historical exhibit featuring artifacts and photographs were displayed in the narthex, and tours of the sanctuary were offered on the half-hour throughout the evening.” 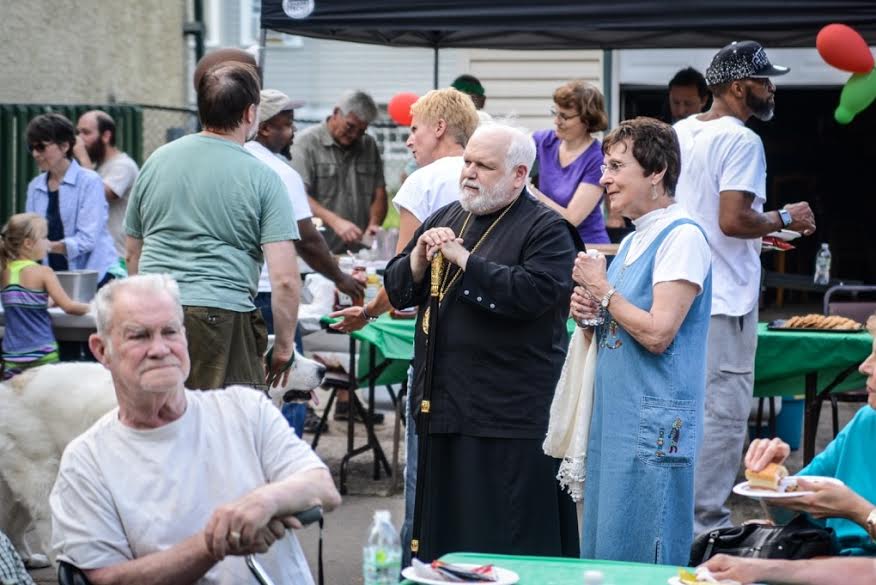 On Sunday morning, Bishop Paul was greeted with the traditional bread and salt by Holy Trinity’s most senior member, Zina Minich.

“As the choir sang the beautiful hymns and responses throughout the Hierarchical Divine Liturgy, a sense of timeless continuity seemed to unite all in praise and gratitude to God for our many blessings,” Father Jonathan added.  “At the close of the Liturgy, Bishop Paul presented the parish with a Synodal Gramota, after which a group photo was taken to capture a moment in time for future generations.”

The celebration concluded with a banquet in the parish’s Archangel Michael Hall with many guests, parishioners and neighbors enjoying dinner and the festive spirit. 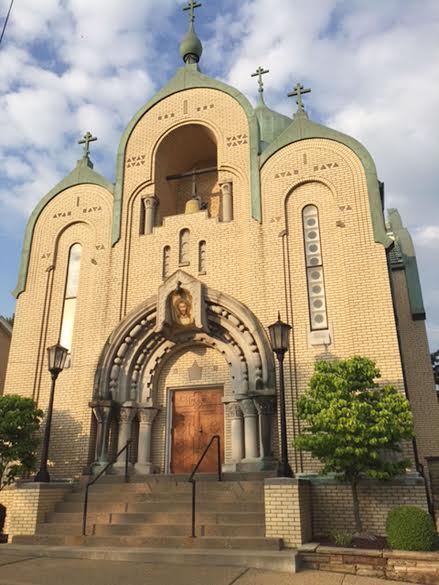 Archpriest Igor Soroka and the faithful of Saint Nicholas Church, Donora, PA celebrated their parish’s 100th anniversary with a weekend of services and social events that brought together current and former parishioners, visiting clergy and guests July 23-24, 2016.

The weekend opened with the celebration of Vespers on Saturday evening, after which a reception and open house followed in the parish hall.  On Sunday morning, His Eminence, Archbishop Melchisedek of Pittsburgh and Western Pennsylvania presided at the celebration of the Divine Liturgy and a Service of Thanksgiving, at which Father Igor and visiting clergy concelebrated.  The festivities concluded with a Grand Banquet at the Willow Room, Belle Vernon, PA.

Saint Nicholas Church was established in 1916 by a group of 15 immigrant families from central and eastern Europe.  Initially, the faithful gathered for services in a tiny basement church on Eighth Street and McKean Avenue.  The present church was erected in 1951, and a new parish rectory was added in 1963.  Saint Nicholas Church is a fine example of old Russian Orthodox architecture, featuring a bell tower flanked by two rows of arches and a large onion-shaped dome.  The church also is adorned with a wide variety of icons and murals painted by several nationally known iconographers.

Father Igor, who has served as Rector of Saint Nicholas Church since 1959, noted that the parishioners experienced many difficult challenges over the years, but had overcome them because of their strong faith and perseverance.

“Our founders were men and women who were mostly new to life in America,” said Father Igor.  “It was difficult for them to adjust to a different language and culture, but they always had that spark of hope and belief that God would hear their prayers.  During our anniversary celebration, we reflected on various past events and the way our church has touched so many lives over the years.” 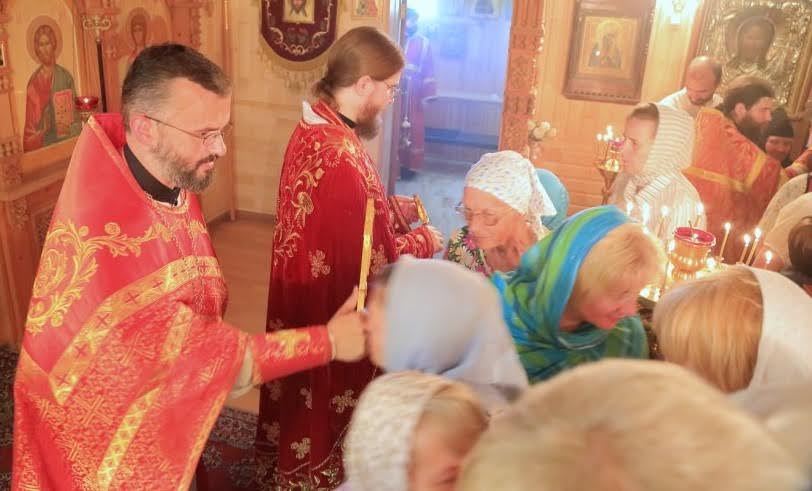 On July 17, 2016, Archpriest Daniel Andrejuk, Rector of Saint Tikhon Church, Anchorage, AK, participated in a pilgrimage to the Skete of the Valaam Icon of the Mother of God in Bortnikovo, Moscow region.  Father Daniel had been invited by Igumen Joseph [Kryukov], Dean of the Moscow Representation of the Valaam Monastery of the Transfiguration.

After concelebrating the Divine Liturgy with Father Joseph and the Representation’s clergy, Father Daniel spoke to the pilgrims about the life of the Church in Alaska. 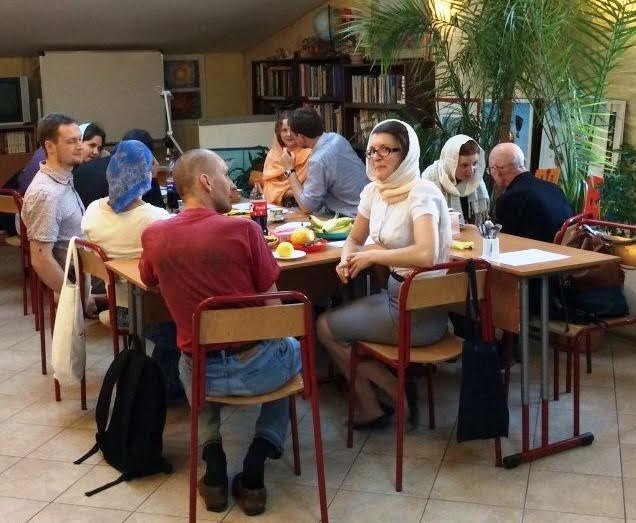 The following day, July 18, Archimandrite Alexander, Dean of the OCA’s Saint Catherine the Great Martyr Representation Church in Moscow, was the guest of the English-language Orthodox Christian Discussion Club, which meets weekly at the Valaam Representation.  Father Alexander spoke on the topic of humility, with the 30-plus attendees sharing their opinions and offering examples of humility that they have encountered.  Specifically, he noted that humility offers a balance between struggling with an overstated self-assessment and hope in God, adding that false humility must at all times be avoided.  He also contrasted the life of the Church in Russia and Canada, where Father Alexander had served prior to his assignment to Moscow.