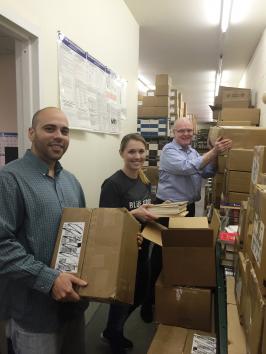 On July 6, 2016, St. Vladimir’s Orthodox Theological Seminary sent $15,000 worth of theological books on a 7,000-mile journey to the Orthodox Patriarchal Ecclesiastical School of Makarios III in Nairobi, Kenya. The

African seminary is the recipient of a tithe of St. Vladimir’s most recent #GivingTuesday Campaign, which took place on December 1, 2015. The Campaign raised a grand total of $148,764, and St. Vladimir’s pledged 10% of that sum to supply the African seminary’s library with much needed books.

“We are thrilled to share the blessing God has given us with our sister seminary in Nairobi,” said the Very Reverend Dr. Chad Hatfield, CEO at St. Vladimir’s. “Our #GivingTuesday donors gave generously to support our campaign, and we want to thank them and others for helping us to spread this blessing abroad.

“For example,” he continued, “we soon realized that including books from other Orthodox publishers—besides our own SVS Press—would greatly benefit the African seminarians, so our bookstore staff contacted St. Tikhon’s Monastery Press, Ancient Faith Publishing, Sebastian Press, Holy Cross Seminary Press, and the Orthodox Christian Education Commission (OCEC), who generously provided their books to us at wholesale cost.

“Also,” Fr. Chad went on, “we are enormously indebted to our fellow Orthodox Christian, Jacob Matthew, president of National Air Cargo (Middle East and Pacific Rim region), the company that took the responsibility of moving these books from the United States to Africa without any cost, as a kind gesture in support of this great initiative for the right cause.

“Every year on #GivingTuesday we are grateful for our donors’ charitable hearts,” he concluded, “and we are finding every year that their gifts keep multiplying as we share them with our Orthodox Christian brothers and sisters around the world.”

View a video of Fr. Chad Hatfield blessing the books prior to their shipment to Nairobi.