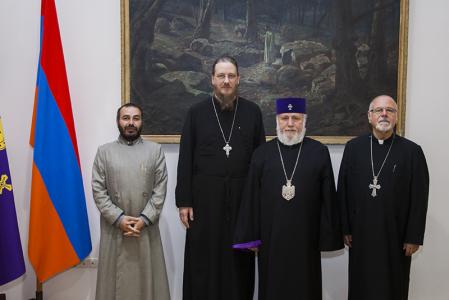 From June 13–18, 2016, the Very Reverend Dr. John Behr, dean of St. Vladimir’s Orthodox Theological Seminary in Yonkers, NY, accompanied by the Reverend Dr. Mardiros Chevian, dean of St. Nersess Armenian Seminary in Armonk, NY, was received by the Supreme Patriarch and Catholicos of All Armenians, His Holiness Karekin II, headquartered at the Mother See of Holy Etchmiadzin in the Republic of Armenia. One result of the visit was a collaborative agreement signed between St. Vladimir’s and Gevorkian Theological Seminary, which provides for an exchange of faculty and students, courses of study, and library books, and which arranges for St. Nersess Seminary to serve as an intermediary between the two schools.

“The Deans of all three of our schools first met in April when the Very Reverend Garegin Hambardzumyan of Gevorkian Seminary was visiting the Eastern Diocese of the Armenian Apostolic Church in America and stopped by on our campus,” explained Fr. John.

“In return, during my trip to Armenia,” he continued, “I met with the faculty of Gevorkian Seminary—particularly about the possibilities of online instruction for our respective students—and I addressed a select group of their students about the nature and task of theology; as well, I met with Bishop Gevork Saroyan, the episcopal overseer of all theological schools in Armenia.” 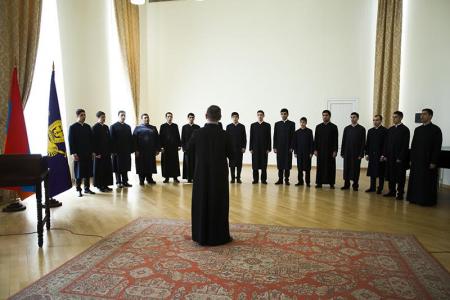 The highlight of Fr. John’s visit was his meeting with His Holiness Karekin II, during which the two spoke about matters of theological education and methods to improve communication and collaboration between their seminaries. Father John presented the Catholicos with an icon of St. Vladimir holding his seminary’s campus Chapel of the Three Hierarchs, and he received in return a translation of The Prayers of St. Gregory of Narek and a book about the Armenian Church from His Holiness.

“It was truly impressive to hear of the Catholicos’s work in building up the Church in Armenia over the last decades,” noted Fr. John, “especially the thoughtful and purposeful attention he has given to theological education—making it possible for his young theologians to study abroad before coming back to Armenia as faculty members.”

Additionally, Fr. John was able to visit the Matenadaran Library, where he was shown exhibits of ancient Armenian manuscripts, including many very beautiful illuminations. He was given a digital copy of the Armenian manuscript containing the works of St. Irenaeus—a church father who has served as a major source for his own academic work. He also met with Bishop Yesnik (Petrosian), the Chairman of the Board of Trustees of the Armenian Bible Society, and discussed issues regarding the translation of Scripture and the need to promote the reading of Scripture. 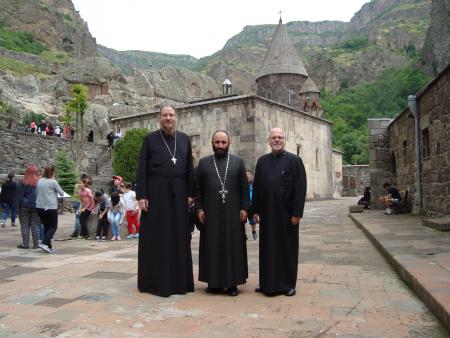 He also was able to visit famous pilgrimage sites, such as the Khor Virap Monastery near Mount Ararat, where St. Gregory, the Illuminator of Armenia, spent 14 years imprisoned in deep cave-well; and the Geghard Monastery in the mountains to the east of Erevan, which is a recognized spiritual and cultural center that houses a seminary, a library, and a manuscriptorium. The main church of Geghard Monastery was built in 1215, and in the following century two “cave churches” cut directly into the stone mountain were added; UNESCO lists the monastery as a world heritage site.

“The trip occurred because of the initiative of Fr. Mardiros,” said Fr. John. “He made all the preparations and arrangements, and was an extremely gracious host and guide. Since this was the first time in the history of St. Vladimir’s Seminary that one of its Deans was able to make an official visit to Armenia, I am so grateful to Fr. Mardiros for his making my visit not only possible but incredibly fascinating and fruitful.”