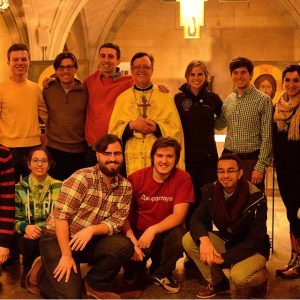 University/College: George Washington University (but I am a part of Georgetown’s OCF)

What are your plans for after graduation?

Find a job, make enough money to survive, get out of D.C.

When I was a freshman commuting between George Washington & Georgetown, I would get there early. I was terrible at running my own affairs on my own so I was lacking sleep and getting between the two campuses too early or too late. If I got there too early, I slept in our chapel curled up on top of my backpack under the icon of Christ. I remember falling asleep looking up to Him & a candle lit and waking up refreshed. The OCF was my spiritual refuge and for a couple of months was my physical refuge until I got my life together.

Words of wisdom for the next class of OCFers:

Just as Father Constantine told me that the Church is our home no matter where we go, the OCF in college is no exception. The Georgetown OCF was there for me when my own university wasn’t. I leave a part of myself in Copley Crypt, where we had vespers & celebrated pre-consecrated Divine Liturgy.